The PM insisted she and the chancellor will increase state pensions in line with inflation after previously indicating it could be ditched. 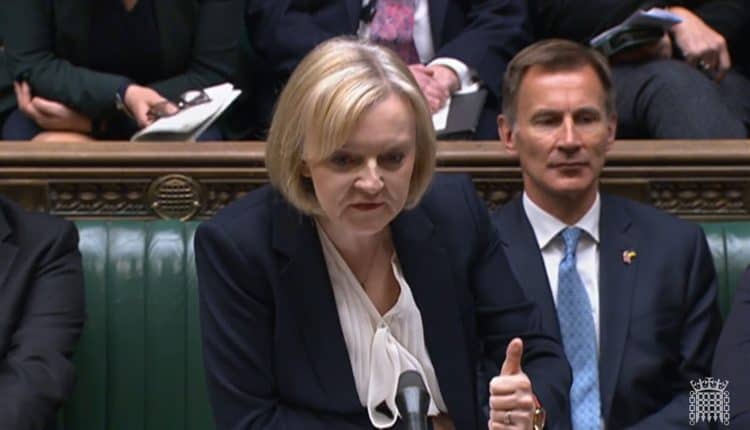 Liz Truss has insisted she IS “completely committed” to the triple lock on state pensions just a day after Downing Street triggered a backlash by indicating it could be ditched.

The Prime Minister told MPs on Wednesday that she and Chancellor Jeremy Hunt will be increasing pensions in line with inflation, which currently stands at more than 10 per cent.

Ministers were considering ditching the manifesto promise due to the squeeze on the public finances in the wake of the mini-budget fiasco.

Ms Truss faced a fresh wave of anger after No 10 said the policy was under review and her new Chancellor failed to commit to it as he seeks to plug a multibillion-pound black hole.

But she told Prime Minister’s Questions: “We’ve been clear in our manifesto that we will maintain the triple lock and I’m completely committed to it – so is the Chancellor.”

However, Ms Truss continues to face a rebellion on another front after she refused to give the same commitment to increasing benefits in line with inflation.

Tory John Baron urged her to show “compassion in politics” by maintaining the inflation link.

Ms Truss said “we will always work to protect the most vulnerable” but stopped short of using the same firm language she reserved for pensions.

Existing policy dictates that from April next year the state pension and benefits should increase by 10.1%, the figure for consumer price index inflation in September.

Tory critics have been threatening to rebel if Ms Truss backtracks on the commitment on welfare payments, which would hit claimants with real-terms cuts.

The Prime Minister declined to give a commitment to also increase benefits in line with inflation.

On Tuesday, the Prime Minister’s official spokesman said he could not make “any commitments” on the pensions triple lock.

A day earlier, Mr Hunt raised the possibility that the triple lock could be scrapped, telling the Commons he would not make any commitments on “individual policy areas”.

But Ms Truss’s subsequent firm commitment to maintaining the policy appears to be designed to head off increased Conservative anger.

Tory MPs Maria Caulfield and Steve Double had already declared they would not vote to end the triple lock.

“Pensioners should not be paying the price for the cost-of-living crisis whether caused by the war in Ukraine or mini-budgets,” Ms Caulfield tweeted.

Campaigners warned that failing to keep pensions in line with rising prices would be “devastating” and a “flagrant breach of trust”.

In response to the announcement of September’s inflation figures on Wednesday, Mr Hunt did not refer to the pensions promise but instead said help would be targeted at the most vulnerable.

The Tory manifesto in 2019 committed to the triple lock, which guarantees the state pension will increase in line with the highest figure of average earnings, inflation or 2.5%.

Mr Hunt said: “I understand that families across the country are struggling with rising prices and higher energy bills.

“This Government will prioritise help for the most vulnerable while delivering wider economic stability and driving long-term growth that will help everyone.”