Truss has been warned that breaking the triple lock promise would be “devastating for the millions who rely on the state pension”. 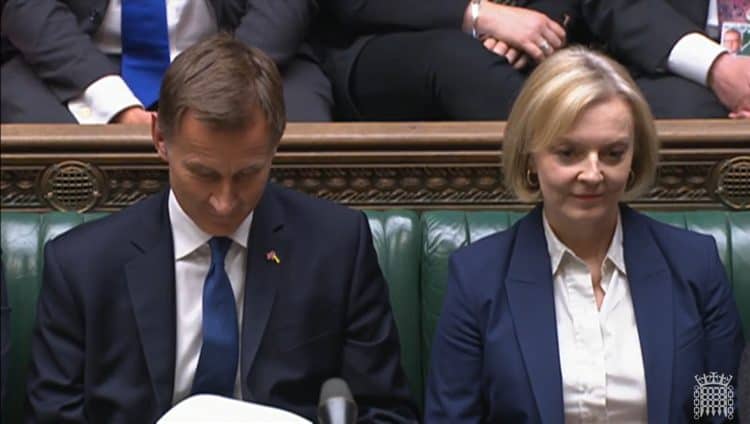 Liz Truss and Jeremy Hunt have been warned not to betray older Britons by failing to keep a promise to increase the state pension by more than 10 per cent.

The Government is considering ditching a promise to increase pensions in line with inflation due to the squeeze on the public finances in the wake of the mini-budget fiasco.

Under the policy, from April next year the state pension and benefits would increase by 10.1 per cent, the figure for consumer price index inflation in September.

But Downing Street said the commitment to increase pensions in line with inflation – which was confirmed as recently as October 2 by the Prime Minister – was now under review.

Campaigners warned that failing to keep pensions in line with rising prices would be “devastating” and a “flagrant breach of trust”.

In response to the announcement of September’s inflation figures on Wednesday, Chancellor Mr Hunt did not refer to the pensions promise but instead said help would be targeted at the most vulnerable.

The Tory manifesto in 2019 committed to the triple lock, which guarantees the state pension will increase in line with the highest figure of average earnings, inflation or 2.5 per cent.

Ms Truss, who is battling to save her premiership after the mini-budget and the subsequent U-turns, would face a potentially fatal revolt from Tory backbenchers if she sought to ditch the promise and instead linked pension and welfare payments to earnings rather than the higher inflation figure.

Mr Hunt said: “I understand that families across the country are struggling with rising prices and higher energy bills.

“This Government will prioritise help for the most vulnerable while delivering wider economic stability and driving long-term growth that will help everyone.”

The triple lock had been temporarily suspended for 2022-23 because earnings soared as people returned to work from furlough and coronavirus restrictions, but it was expected to be restored before inflation soared.

Age UK’s charity director Caroline Abrahams said the rate of inflation “only strengthens the case for reinstating the triple lock” and warned Ms Truss that breaking the promise would be “devastating for the millions of older people who rely on the state pension”.

She said: “Knowing their state pension would keep pace with rising prices because of the triple lock has given precious hope to many older people at a time of great anxiety. For the Government to take that away from them now would be a hammer blow, as well as a flagrant breach of trust.”

The Institute for Fiscal Studies has estimated that each percentage point increase in inflation would add £2.4 billion a year in pension and welfare spending from April.

The Office for Budget Responsibility had estimated a 7.5 per cent inflation level, so the 10.1 per cent figure would add billions to plans for the welfare bill.

But the Resolution Foundation think tank, which focuses on living standards, warned the Government against seeking a quick saving at a time when a “bleak outlook means that family incomes will continue to fall sharply again next year”.

The foundation said that linking increases to earnings – at around 5.5 per cent – rather than inflation would save £5.6 billion next year if applied to pensioner benefits – state pension and pension credit – and a further £2.4 billion if applied to working-age benefits.

But the think tank’s senior economist Jack Leslie said: “While the significant Treasury savings may look tempting in the context of its attempts to fill its fiscal hole, the cost to 10 million working age families and almost every pensioner would be huge amid the deepest cost-of-living crisis for half a century.”

The Chancellor is expected to set out his plans for pensions and benefits in his October 31 statement, but Tory MPs have warned they will not accept breaking the triple-lock promise to pensioners.

In a sign of potential dissent to come, Tory MPs Maria Caulfield and Steve Double declared they would not vote to end the triple lock.

“Pensioners should not be paying the price for the cost-of-living crisis whether caused by the war in Ukraine or mini-budgets,” Ms Caulfield tweeted.

Mr Double quoted her message, which stated clearly she would “not be voting to end the pensions triple lock”, with the caption: “Nor me.”

Liberal Democrat Treasury spokeswoman Sarah Olney said: “In the midst of this cost of living catastrophe, pensioners and those relying on benefits cannot be undercut and left to struggle further.

“Liz Truss must act today to reassure the public and confirm in Parliament that pensions and benefits will rise to match inflation.”