A new YouGov survey puts the Tories on 36 per cent - and Labour just behind on 35 per cent. 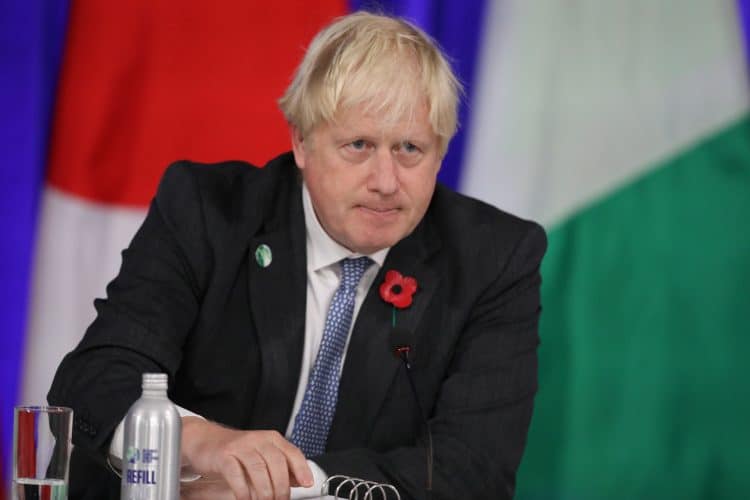 Fury is mounting on the Conservative benches as a shock new poll revealed the damage inflicted by Boris Johnson’s botched bid to save pal Owen Paterson from a lobbying scandal.

A survey carried out by YouGov in the wake of the dramatic Commons vote on Wednesday to suspend the standards system showed the Tory poll lead plummeting by five points.

The party is now just one point of Labour, plunging from 39 per cent to 36 per cent in just a week – while Keir Starmer has seen his stock rise to 35 per cent, according to the poll in The Times.

As the fallout continues, the prime minister now faces the prospect of a by-election in North Shropshire which will be dominated by allegations of sleaze following Paterson’s resignation.

And Labour has demanded an investigation into comments by the business secretary relating to the future of the Parliamentary Commissioner for Standards, whose probe into Paterson triggered the chaos seen this week in Westminster.

Former Cabinet minister Paterson quit as an MP rather than face the prospect of being suspended from Parliament for 30 sitting days for an alleged breach of lobbying rules.

The senior Tory announced his resignation after the prime minister was forced to abandon a plan to prevent Paterson’s immediate suspension by launching a review of the entire disciplinary system.

The controversial plan was backed by almost 250 Tory MPs on Wednesday, although there was a sizable rebellion and by Thursday morning the government was forced into a U-turn, blaming a lack of cross-party support.

The farcical series of events have led to some Tories pointing the finger of blame at Chief Whip Mark Spencer, although Downing Street insisted Johnson had confidence in him and the “excellent job” he was doing.

Former chief whip Mark Harper who was one of 13 Tories to rebel to vote against the plans on Wednesday, said the affair was “one of the most unedifying episodes” he has seen during his 16 years in Parliament and appeared to blame Johnson.

“My colleagues should not have been instructed, from the very top, to vote for this,” he said.

Paterson had a comfortable majority of almost 23,000 in North Shropshire and the circumstances of the by-election have led to claims the opposition parties could unite behind a single anti-sleaze candidate, although Labour sources insisted no “official” talks had taken place.

Before the government’s U-turn and Paterson’s subsequent resignation, Business Secretary Kwasi Kwarteng suggested the result of the vote calling for reform of the Commons standards regime had put Kathryn Stone’s position as Parliamentary Commissioner for Standards in doubt.

“I think it’s difficult to see what the future of the commissioner is, given the fact that we’re reviewing the process, and we’re overturning and trying to reform this whole process, but it’s up to the commissioner to decide her position,” he told Sky News.

Deputy Labour leader Angela Rayner has demanded an investigation into whether those comments breached the Ministerial Code which calls for “consideration and respect” and for “proper and appropriate” working relationships with parliamentary staff.

In a letter to the independent adviser on ministers’ interests Lord Geidt, Rayner said: “For the Business Secretary to use this entirely corrupt process to bully the independent Parliamentary Commissioner is disgusting.”

Paterson faced a vote on his suspension after he was found to have repeatedly lobbied ministers and officials for two companies paying him more than £100,000 per year.

He had always maintained his innocence but said he was resigning because “I am unable to clear my name under the current system” and due to a desire to spare his family any more suffering – Paterson’s wife took her own life in 2020.

Johnson said he was “very sad” that Paterson was standing down after a “distinguished career”.