Thankfully, Sangita Myska was on hand to set the record straight. 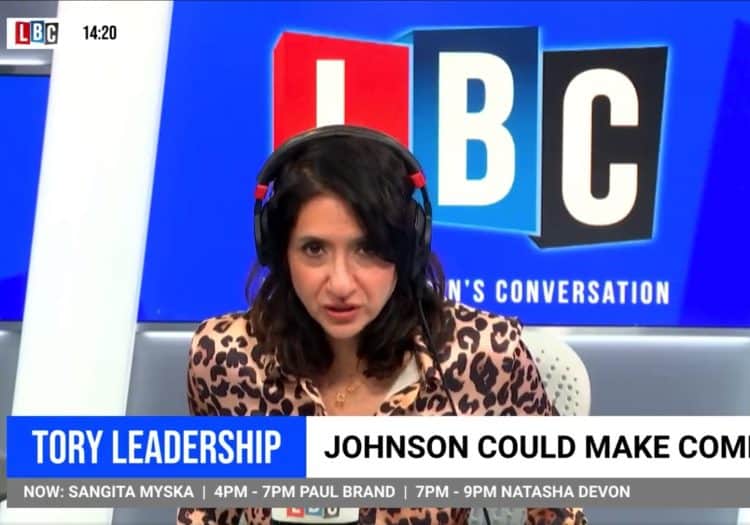 Tory MPs have until 2pm on Monday to secure 100 nominations to go to a membership vote, with the possibility of a Johnson/ Sunak head-to-head looking likely.

Sir James Duddridge, a friend of Johnson, said the former prime minister had the support of the 100 MPs required to reserve his place in the vote.

That would likely make him the frontrunner in the race to become the next UK prime minister.

Speaking to LBC’s Sangita Myska, one Tory Party member explained why they will be backing Johnson for the role.

He said: “We want Boris back and Boris has the best chance of winning the next election.

“Rishi’s not gonna win it. Rishi’s not even British, in most people’s opinion. He’s got American allegiance, his family’s American. They’re Indian businesspeople. He doesn’t love England like Boris does.”

Despite the caller’s shocking allegations, Sangita calmly took apart his arguments, pointing out that Sunak was born and educated in England.

She explained: “He’s a British citizen.

“He is the man who many people credit, through the furlough scheme, [that] saved the economy.”