Greg Hands challenged opponents of the Rwanda plan to "show what their solution would be". 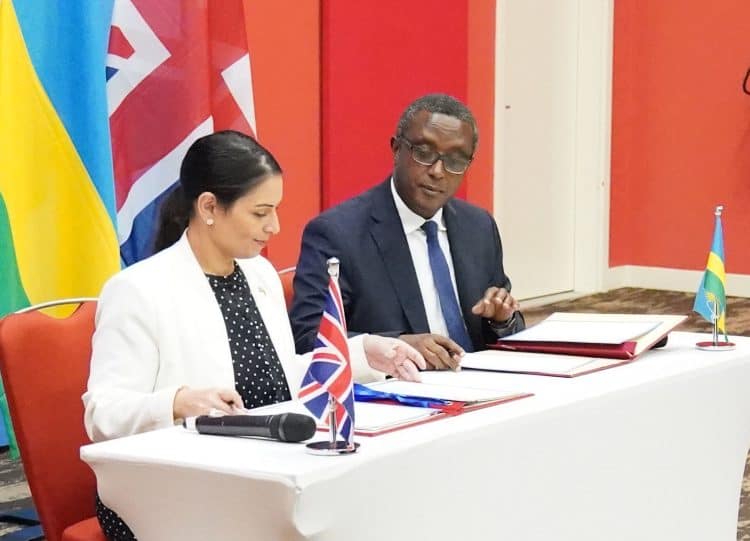 A Tory minister has denied that the UK is outsourcing its responsibilities by sending migrants to Rwanda, after religious leaders criticised the move.

Greg Hands also echoed Home Secretary Priti Patel’s challenge for critics of the plan to come up with a better idea to tackle small boat crossings.

It comes after the Archbishop of Canterbury, Justin Welby, accused the UK of “subcontracting out our responsibilities” by sending migrants thousands of miles to east Africa, which he said is “the opposite of the nature of God who himself took responsibility for our failures”.

Energy minister Hands told Sky News: “No, we’re not. This is an agreement between two sovereign countries, the UK and Rwanda.

“I think what others, the critics of this plan, need to do is to show what their solution would be.”

‘We can do better’

Patel had challenged opponents of the scheme to come up with a better idea to tackle “illegal” migrant crossings.

But writing a joint article in The Times with Rwandan foreign minister Vincent Biruta, the Home Secretary insisted her controversial plans were “bold and innovative”.

She added: “It’s surprising that those institutions that criticise the plans fail to offer their own solutions.”

Hands said sending migrants to Rwanda will act as a “significant deterrent” to people deemed to be entering the UK illegally.

“We need to be sending that message now – that crossing the Channel illegally isn’t necessarily going to lead to the person being located in the UK.

“So the relocation to Rwanda is there – it will act as a significant deterrent, we think, to people making that journey. And (it) will ultimately be at the cost of the people smugglers who… we want to put out of business.”

An exchange of letters published by the Home Office on Saturday night showed the department’s permanent secretary Matthew Rycroft warned Ms Patel that although the policy was “regular, proper and feasible”, there was “uncertainty surrounding the value for money of the proposal”.

Shadow policing minister Sarah Jones said it is “madness” to expect migrants to stay in Rwanda after they try to reach the UK.

She claimed the government is merely “moving” the people-smuggling problem rather than “fixing” it.

Speaking to Times Radio, she said: “The government hasn’t even said how much this is going to cost – the £120 million is just an upfront payment to the Rwandan government. The actual admin of the scheme, they don’t even know how much that’s going to cost.

“Sending people 4,000 miles before they’ve made a claim and expecting them to stay in a country they don’t want to be in is madness.

“We are just moving the people-smuggling problem, we are not fixing it, which is what the government claims to try and do.”