The figures were revealed following. a Freedom of Information request. 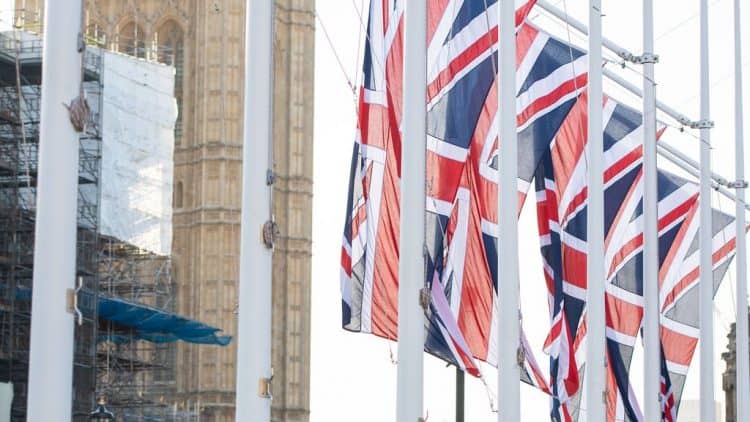 The Government has spent more than £163,000 on Union flags in two years as part of its drive to boost pride in the national symbol.

Figures reported by the Guardian showed spending had increased in virtually every Whitehall department since Boris Johnson became Prime Minister.

The Ministry of Defence has spent £118,000 since the start of 2018 while the Department for Digital, Culture, Media and Sport (DCMS) spent £54,420.89 last year alone as worn-out flags were replaced.

The Cabinet Office has spent more than £3,000 since the start of 2018, with just under £2,000 of that funding the purchase of eight flags in the most recent financial year.

The figures, revealed by Freedom of Information Act requests, found the Treasury has spent nearly £1,000 on Union flags since 2018, including three this year at a cost of £607.06.

The Department for Transport has spent £1,100 since 2018, including £700 last year, the Ministry of Housing, Communities and Local Government spent £90.05 on the flags this year, with no record of purchases in other recent years.

The Department for Business, Energy and Industrial Strategy spent £392 this year and last – zero in the years previously – while the Department for Work and Pensions spent £1,045 in the last three years.

The Department for International Trade spent £653.05 this year and last.

Robert Colls, professor of cultural history at De Montfort University, told the Guardian: “I think what we are seeing at the moment from the Government is a kind of pushback against devolution and threats to the Union.”

In March, the DCMS published new guidance calling for the flag to be flown every day above Government buildings.

At the time, Culture Secretary Oliver Dowden said the flag was a “proud reminder of our history and the ties that bind us”, and “people rightly expect it to be flown above UK Government buildings”.

Exemptions apply when other flags – such as national flags of England, Wales, Scotland and Northern Ireland, county flags or other flags to mark “civic pride” – are flown.