Ministers admitted the industry's "reliance on foreign workers" hadn't been solved after Brexit. 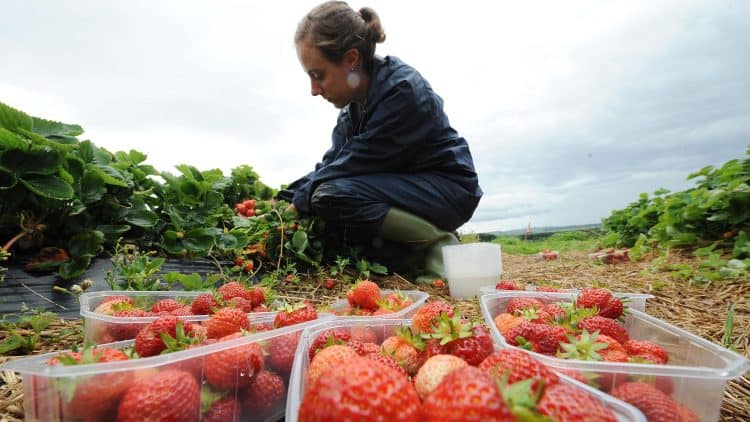 The government will promote “career opportunities” in picking fruit and vegetables in an effort to stop produce rotting on British farms, a minister said.

Brexit sparked a shortage of seasonal agricultural labour after EU workers stayed away, with UK farmers losing millions of pounds as a result.

But opposition politicians have said ministers are to blame for the shortages by making it harder for farmers to recruit from Europe – and claimed there is no real plan to make up the shortfall.

Responding to queries from peers about how the government could avoid a repeat of last year’s debacle, agriculture minister Lord Benyon said: “The government recognises the importance of a reliable source of labour for crop picking and packing, and that it is a key part of bringing in the harvest for the horticultural sector.

“Defra is working closely with industry and other government departments to understand labour supply and demand, and to help our world-leading growers access the labour they need to ensure our crops are picked and not left unharvested.”

Lord Benyon said the government had extended visas for seasonal workers from overseas and admitted the sector has a “reliance on foreign workers” – with 30,000 visas still available.

But he added: “Defra is also working with industry and the Department for Work and Pensions to raise awareness of career opportunities within the food and farming sectors among UK workers.”

It comes after the government’s Pick For Britain campaign was scrapped after just 12 months, despite ministers spending £30,000 promoting the scheme to lure British volunteers to save the country’s crops during the Covid crisis.

Tim Farron, the Liberal Democrats’ food and rural affairs spokesperson told The Independent: “British farmers produce some of the best food in the world, yet the Tories seem happy for another summer of fruit and veg rotting in our fields – despite Putin’s war in Ukraine threatening to starve us of food from abroad.

“It was always reprehensible for Conservative Ministers to cause these shortages by making it harder for British farmers to recruit the workers they need. It’s even more unforgivable that they still don’t have anything approaching a plan to solve them.

“Ministers must get a grip or start looking for new career opportunities of their own.”