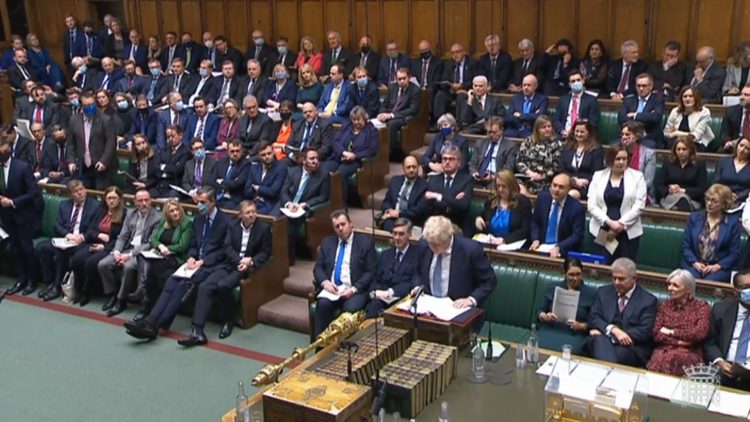 The shocked minister told colleagues about the incident, which happened in the last few months, at a fraught meeting of Tory MPs at Westminster last night, according to the Daily Mirror.

Three sources told the newspaper that around a dozen female MPs at the meeting shared accounts of alleged sexism and harassment by their colleagues.

It comes amid reports that 56 MPs – including three Cabinet ministers – are facing sexual misconduct allegations after being reported to Parliament’s Independent Complaints and Grievance system.

And it follows a sexism row in which Angela Rayner, Labour’s deputy leader, was accused of a ‘Basic Instinct’ plot to distract Boris Johnson at Prime Minister’s Questions.

Several women MPs raised concerns that the toxic atmosphere in the Conservative party could put women off standing for Parliament, with ex-prime minister Theresa May reportedly looking on “with a face like thunder”.

One MP told the Mirror: “It was like a blood-letting. Everybody was sharing awful stories of what had happened to them in the Commons at the hands of male MPs.

“[The chief whip] clearly hadn’t been expecting it and looked knocked for six. But the big question is what happens next”.

Another added: “They were genuinely shocked and horrified. They must realise that there are serious issues they need to address”.

It comes as Angela Rayner hit out at the “sexist slurs” aimed at her as the editor of The Mail On Sunday refused a meeting with the Commons Speaker to discuss an article in his newspaper about the deputy Labour leader.

Speaker Sir Lindsay told MPs on Monday he had arranged a meeting with The Mail On Sunday’s David Dillon following an outcry over claims the Labour deputy leader crossed and uncrossed her legs during PMQs to distract Johnson.

In his response to the Speaker, published in the Daily Mail, Dillon said he and his political editor Glen Owen would not be attending as journalists should “not take instruction from officials of the House of Commons, however august they may be”.

Meanwhile, the Daily Mail published comments made by Ms Rayner in a light-hearted political podcast in January in which she discussed comparisons between her attire and behaviour in the Commons and a scene in the movie Basic Instinct featuring Sharon Stone.

On comedian Matt Forde’s The Political Party, Rayner said she was “mortified” by an internet meme comparing her actions to the scene in which Stone’s character crosses and uncrosses her legs in front of detectives while not wearing underwear.

She said: “There is a tint of misogyny in it…. Every time I do a PMQs somebody has an opinion on what I wear.

“Did you see the meme on Sharon Stone like I was doing it at the last PMQs? I was mortified.”

Forde asked her if the suggestion was that she was “doing that to distract Boris” to which she replied: “It doesn’t take much, does it? I don’t need to do that.”

After the comments were reported, Rayner said on Wednesday: “I said to (Forde) in January that the sexist film parody about me was misogynistic and it still is now.

“As women we sometimes try to brush aside the sexism we face, but that doesn’t make it ok.

“The Mail implies today that I somehow enjoy being subjected to sexist slurs. I don’t. They are mortifying and deeply hurtful.

“She loves it really’ is a typical excuse so many women are familiar with. But it can’t be women’s responsibility to call it out every time. I don’t need anyone to explain sexism to me – I experience it every day.

“Boris Johnson gave assurances he would unleash ‘the terrors of the earth’ on the Tory MPs spreading this vile sexism.

“I hope to hear what he’ll be doing about it today.”