Liberal Democrat leader Tim Farron’s general election campaign got off to a flying start yesterday morning with a statement of intent within a few minutes of the Prime Minister’s surprise call for a snap election on June 8. Customarily quick off the mark, the LibDem leader rose to Theresa May’s challenge: “This election is your chance […]

Liberal Democrat leader Tim Farron’s general election campaign got off to a flying start yesterday morning with a statement of intent within a few minutes of the Prime Minister’s surprise call for a snap election on June 8.

Customarily quick off the mark, the LibDem leader rose to Theresa May’s challenge: “This election is your chance to change the direction of our country,” he announced.

“If you want to avoid a disastrous Hard Brexit. If you want to keep Britain in the Single Market. If you want a Britain that is open, tolerant and united, this is your chance. Only the Liberal Democrats can prevent a Conservative majority.”

But by the time he faced the evening news cameras, Farron’s campaign had already gone awry, as he refused once again to say if he believed homosexuality is a sin.

Tim Farron is a total car crash. No wonder he only wants to talk about Brexit https://t.co/u8H7CpcUOM

In a Channel 4 interview in 2015, the evangelical Christian MP refused to answer three times when asked if he thinks gay sex is a sin. When pushed again on the first evening of the campaign by Channel 4’s Cathy Newman, he refused once again to say if homosexuality is a sin, instead mumbling about how he stood up for gay rights as he squirmed like a fish on a hook.

And around the same time, Fallon’s evening only got worse as a wag inspired by an old Internet poll that apparently found people would trust a fish finger over the LibDem leader to lead the country, started crowdfunding to stand against Tim Farron, vowing to change his name by deed poll to Mr Fish Finger and dress as a fish finger. 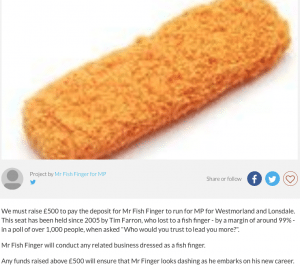 And as his campaign spread across Twitter, within just four hours donors has offered well past his target of £500 to pay the deposit for Mr Fish Finger to run for MP for Westmorland and Lonsdale.

No policy details yet from the potential Mr Fish Finger MP. Fish fingers crossed this is as silly as the general campaign will get, though I doubt it.