An official familiar with the contents of the complete report say its full findings are even more personally critical of the prime minister. 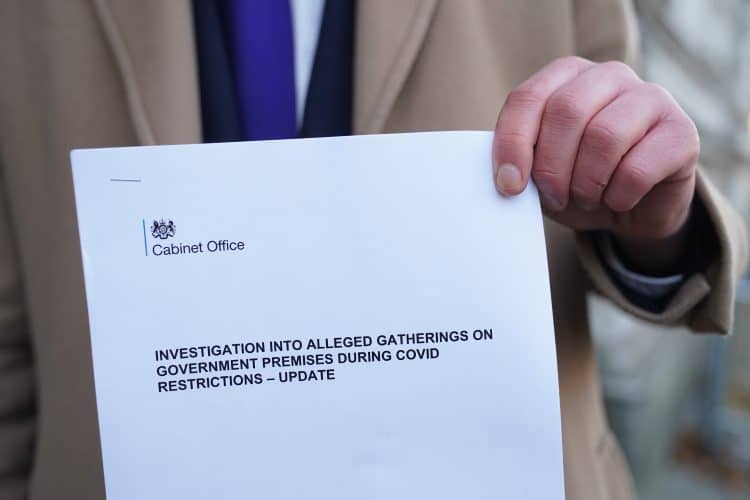 Boris Johnson could be forced to resign after the Sue Gray review into claims of Covid rule breaches in the Government is published, according to a report.

Ms Gray, a senior civil servant, was forced to delay the publication of her investigation into alleged parties held in Downing Street and Whitehall during England’s coronavirus lockdowns due to the Metropolitan Police commencing their own inquiry.

In an interim report published in January, the Cabinet Office official said there had been “failures of leadership and judgment” in No 10 over the so-called partygate saga.

The Times, citing an official it described as being familiar with the contents of the complete report, said Ms Gray’s full findings were even more personally critical of the Prime Minister and could end his premiership.

According to the paper, the official said: “Sue’s report is excoriating. It will make things incredibly difficult for the Prime Minister.

“There’s an immense amount of pressure on her — her report could be enough to end him.”

It comes amid separate reports in the i newspaper that Conservative rebels are preparing to oust Mr Johnson in the event of a poor showing at the local elections next month or if further fines are issued to him.

Downing Street is said to be braced for Mr Johnson to receive a second fixed-penalty notice (FPN) after police reportedly began issuing fines relating to a “bring your own bottle” drinks do in the No 10 garden on May 20, 2020.

He reportedly attended half of the 12 gatherings being probed by police.

Cabinet ministers on Sunday offered a defence of the Prime Minister, with Conservative Party chairman Oliver Dowden suggesting it was “quite a speculation” to predict Mr Johnson could be hit with more FPNs.

He and Brexit opportunities minister Jacob Rees-Mogg backed Mr Johnson to lead the Tories into the next general election, which is currently scheduled for no later than January 2025.

Mr Dowden told Sky News there was a “very strong case for the Prime Minister remaining in office” despite mounting pressure from his own backbenches for him to quit.

Senior backbenchers, including former minister Steve Baker, have put their head above the parapet in recent weeks to call for Mr Johnson to vacate Downing Street following his handling of the rule-breaking allegations.

According to the i, the PM’s critics have begun working in a co-ordinated fashion and are “holding back” to wait for the local election results or for further FPNs to arrive in Mr Johnson’s inbox.

The paper cited other reports that some rebels have prepared no confidence letters to be submitted en masse to the 1922 Committee of backbench Tory MPs should the party take a battering at the polls on May 5.

Mr Dowden has admitted that the council elections will be “challenging”.

Related: What is the Britain Project? Inside the political movement backed by Rory Stewart and, allegedly, Tony Blair