Thin on policy but high on emotion, the Labour leader's 90-minute speech outlined his priorities for government. 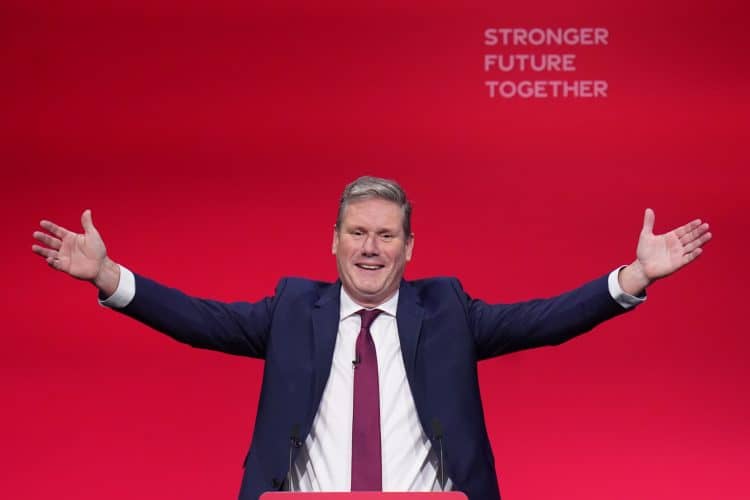 Keir Starmer has vowed never to “go into an election with a manifesto that is not a serious plan for government” at his first in-person Labour conference address since becoming leader.

In a 90-minute speech, which was heckled at points but cheered throughout, Starmer sought to present himself as a prime minister in waiting – contrasting his career as a lawyer and director of public prosecutions with the “trivial” approach of Boris Johnson.

Lashing out at the spiralling fuel crisis and wider concerns over the cost of living, Sir Keir said:  “If you go outside and walk along the seafront, it won’t be long before you come to a petrol station which has no fuel. Level up? You can’t even fill up.”

And he launched a stinging attack on Johnson, saying: “I don’t think Boris Johnson is a bad man. I think he is a trivial man. I think he’s a showman with nothing left to show.”

While thin on policy pledges, Starmer – in an olive branch to the left of the party – pledged Labour’s support for a £28 billion-a-year ‘Green New Deal’, including a “national mission” to insulate 19 million homes over the course of the next decade.

There would be a new Clean Air Act and everything a Labour government does will have to meet a “net-zero” test to ensure that prosperity “does not come at the cost of the climate”.

But after a bruising conference in Brighton which has seen him clash with supporters of his predecessor, Jeremy Corbyn, Starmer was heckled by activists over his refusal to support a £15 hourly minimum wage.

“You can chant all day,” Starmer responded. “Shouting slogans, or changing lives, conference?” he asked – and was greeted with vociferous applause.

In a highly personal speech, the Labour leader described “family and work” as “the two rocks of my life – the two sources of what I believe to be right and good”, highlighting his background as the son of a toolmaker and an NHS nurse who later needed long-term care.

He said: “It’s easy to comfort yourself that your opponents are bad people.

“Once he had said the words: ‘Get Brexit Done’, his plan ran out. There is no plan.”

He claimed Britain had been left “isolated and irrelevant” on the world stage under Johnson – but he also recognised Labour’s failure under Corbyn to defeat the Tories, and praised the party activists who had saved it from “obliteration” in the landslide defeat in 2019.

In the first full conference since that catastrophic defeat, Starmer said voters “reluctantly chose the Tories because they didn’t believe our promises were credible” – while others saw the party as “unpatriotic”.

Addressing those people, Starmer vowed to “never under my leadership go into an election with a manifesto that is not a serious plan for government.”

“I can see the ways in which we can remake this nation and that’s what we get to do when we win,” he added. “Yet, in a way, the more we expose the inadequacy of this government the more it presses the question back on us.

“If they are so bad, what does it say about us? Because after all in 2019 we lost to them, and we lost badly. I know that hurts each and every one of you. So, let’s get totally serious about this – we can win the next general election.

“This government can’t keep the fuel flowing, it can’t keep the shelves stocked, and you’ve seen what Boris Johnson does when he wants more money – he goes straight for the wallets of working people.

“Labour is the party that is on the side of working people.”

Covering a wide range of issues – from criminal justice to education and social care – Starmer pledged to do more to do more to help victims of crime, and announced a focus on mental health as “one of the urgent needs of our time”.

In an echo of Tony Blair, the Labour leader said he would “launch the most ambitious school improvement plan in a generation” – and said it would be “stupid to allow theatre, drama and music to collapse in state schools”.

While Sir Keir distanced himself from the Corbyn era – promising “we will never under my leadership go into an election with a manifesto that is not a serious plan for government” – he praised the record of the New Labour years.

Highlighting improvements in healthcare, social mobility and poverty reduction, he said: “You want levelling up? That’s levelling up.”

Related: Labour promises to fix Johnson’s Brexit deal if it wins next election