"The PM knew exactly what he was doing," Starmer said. 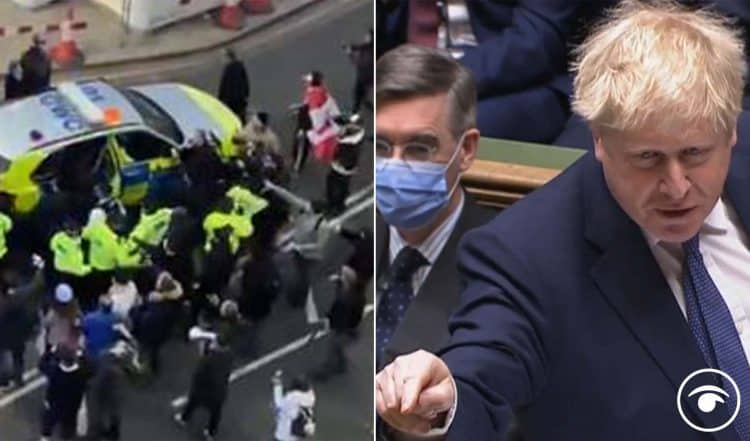 Keir Starmer has blamed Boris Johnson’s Jimmy Savile slur for inciting a mob that confronted him outside parliament on Monday.

The Labour leader said he had never been publicly accused of being a “paedophile protector” until the prime minister falsely accused him of failing to prosecute Savile when he was director of public prosecutions (DPP).

Speaking to the Times, Sir Keir said Johnson had used a “deliberate slur without any basis in fact”.

He added: “The PM knew exactly what he was doing. It is a conspiracy theory of violent fascists that has been doing the rounds for some time.”

On Monday, police bundled the Labour leader into a car after he was surrounded by demonstrators who accused him of protecting paedophiles while others yelled “nonce”.

Johnson has refused to apologise for the remark, but has claimed that he was not referring to Starmer’s personal record as DPP.

Starmer told the Times: “I have never been called a paedophile protector before. That happened [on Monday] for the first time in my life. If others want to argue that this is unconnected with precisely what the PM said one week before then let them make that case. But they’ll never persuade me that there is no link.”

He again said he had no involvement in the decision not to prosecute Savile. “I knew nothing about the decision. When Savile died I instigated a review to audit whether any cases had come across the desk of any CPS officers and discovered at that stage decisions had been made.”

The Labour leader added: “It’s not about me, it’s the way we conduct our politics. I don’t want to see us go down the route that this potentially takes us.”

Sir Keir’s spokesperson said he was “fine” after the incident.

A spokesman for the opposition leader told reporters: “He was back at his desk straight after. Police did their job.

“Obviously these things look sort of rougher on the camera often than they are.

“But, as I say, police did a good job, he was back at his desk afterwards and he was off playing five-a-side football that night as normal.”

A host of Conservative and opposition MPs have called for Johnson to apologise for what was branded a “scurrilous accusation” against Sir Keir.

Johnson’s official spokesman acknowledged his original words last week in the Commons were “capable of being misconstrued” and said that was why he subsequently issued a “clarification”.

“The prime minister clarified his remarks last week to make clear he was not suggesting Keir Starmer was individually responsible for the Savile decision,” the spokesman said.

He added: “I think the prime minister was making a political point about taking responsibility for organisations as a whole.”

Johnson tweeted on Monday evening that the “behaviour directed” at the Labour leader was “absolutely disgraceful”.

Although Sir Keir was head of the Crown Prosecution Service in 2009 when a decision was taken not to prosecute Savile, he had no personal involvement in the deliberations.

Labour said Monday’s incident occurred when Sir Keir, who was accompanied by shadow foreign secretary David Lammy, was walking back from the Ministry of Defence after a briefing on the situation in Ukraine.

Related: Carers and vulnerable ‘left out’ of Johnson’s Covid free-for-all