Sir Keir challenged Johnson to "stand up to his chancellor" over the cost-of-living crisis. 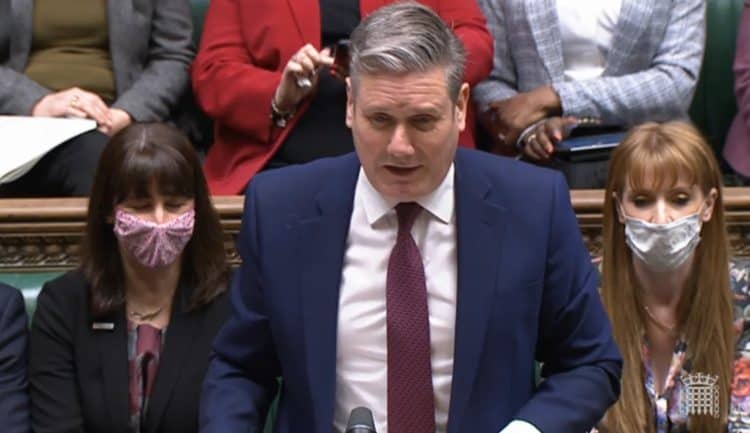 Boris Johnson and “loan shark” Rishi Sunak have been accused by Labour of operating a “big scam” via their energy bill support package.

Labour leader Sir Keir Starmer used Prime Minister’s Questions to raise concerns over the government’s policy to give all 28 million households in Britain a £200 up-front rebate on their energy bills from October.

This will be recouped by hiking bills by £40 per year over five years from 2023. Chancellor Sunak has also promised a £150 council tax rebate for homes in bands A to D.

Sir Keir told Johnson to “stand up to this chancellor” by telling him to support families “rather than loading them with debt” and take a look at the “bumper profits” of oil and gas giants.

But Johnson said the Labour plan, which includes a windfall tax on North Sea oil and gas producers, would “clobber” supplies but joked it was an “improvement” on nationalising the companies.

The prime minister added: “What he would be doing is hitting the energy companies at precisely the time when we need to encourage them go for more gas because we need to transition now to cleaner fuels.

“What this government is providing is £9.1 billion worth of support, it’s more generous than anything Labour is offering.”

But Sir Keir accused Johnson of “bluff and bluster”, adding in the Commons: “The reality is this – on top of the Tory tax rises, on top of the soaring prices, the loan shark chancellor and his unwitting sidekick have now kicked up a buy-now, pay-later scheme.

“It leaves taxpayers in debt while oil and gas companies say they’ve got more money than they know what to do with.

“It’s the same old story with this government: get in a mess, protect their mates and ask working people to pick up the bill.

“But isn’t he worried that everyone can now see that with this prime minister and this chancellor it’s all one big scam and people across the country are paying the price?”

Johnson replied: “What they can see is a government that is absolutely committed to doing the right thing for the people of this country and taking the tough decisions when Labour is calling for us to take the easy way out and spend more taxpayers’ money.”