"I’m sorry but who ever signed off Keir Starmer being subjected to 5 mins of why Brian Cox will never vote Labour again is an evil genius," Ava Santina said. 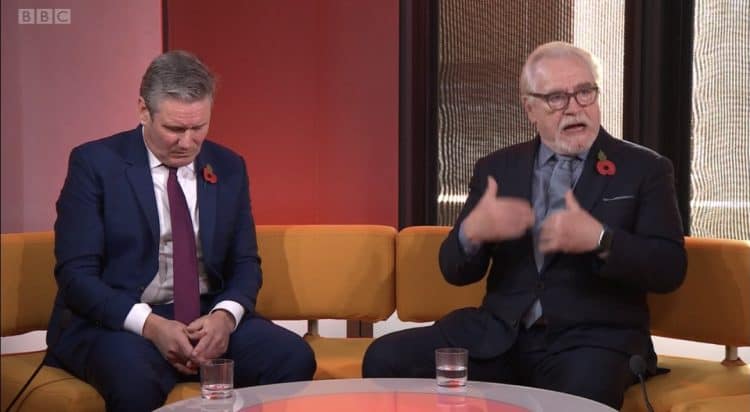 Sir Keir Starmer had a rough ride of it on the Andrew Marr Show this morning as actor Brian Cox gave a stinging verdict on how Labour has treated Scotland.

The Succession star, who was the voiceover for Tony Blair’s campaign adverts in the 90s, quit Labour in 2015 to join the SNP.

He cited Brexit and the Iraq War as key reasons for switching to back independence.

Asked why he left Labour, Cox explained: “It comes really down to what I thought was a failure of social democracy, particularly around about 2012, 2010.

“Also, the Iraq war, that affected me. Blair’s hubris affected me. And I saw the party going in a certain direction.

“I was really very concerned because I’m a socialist.”

“My country was traduced for long enough”

He acknowledged he agrees with Starmer about “many things”, adding: “But my country was traduced for long enough, time and time again.

“So Scotland has always been sidelined.”

Starmer admitted his party has “hard work” to do to win back voters in Scotland, which he said “has to be an essential” of policy – “not an afterthought or a secondary consideration”.

The Labour leader once again ruled out any prospect of a deal with the SNP at Westminster as a possible route for the party back into Number 10.

Cox was asked for his thoughts on Labour’s decline. He replied: “It’s a hard question. It really is. It’s a painful question. You know, I’ve been caught. I look at what happened in the north [of England] in the last election and I was devastated by that because I’m a socialist.

“Also, I have to put my country first because I have looked at what’s happened to my country and I’m disgusted.

“The penny only dropped later. Because I was young, I was ambitious, I was thinking about other things. I wasn’t thinking about politics and of course, I was the voice of Labour in 1997. I did all the ads, and I gave myself to it.

“But at the end of the day, Scotland is prime for me.”

Last year, the actor provided the voiceover for an SNP campaign video ahead of the Holyrood election.

In it, he explained why Scotland “has what it takes to be an independent country”.