Mick Lynch has accused Sir Keir Starmer of “playing up to the agenda of Liz Truss and the right wing press.” 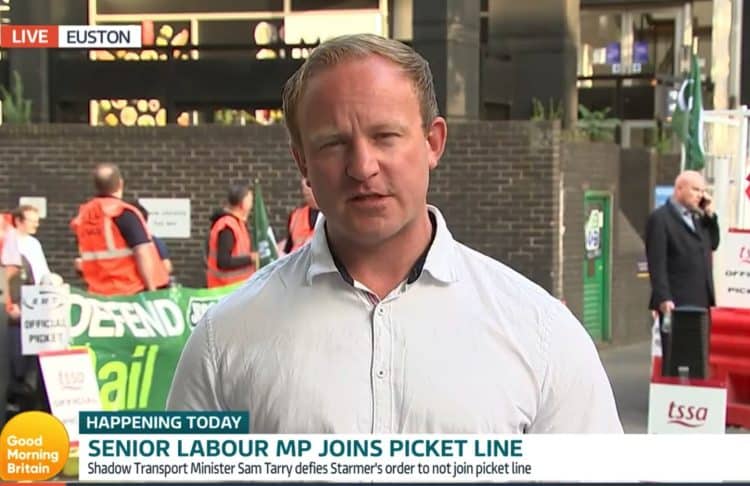 Former shadow chancellor John McDonnell has hit out at Sir Keir Starmer’s decision to sack Sam Tarry after he joined a picket line in support of striking rail workers.

The party said Mr Tarry, the shadow transport minister, had been “removed from the frontbench”, saying it took seriously “any breach of collective responsibility”.

Mr Tarry stood alongside striking workers at London’s Euston station on Wednesday morning, despite Sir Keir’s orders to stay away from the demonstrations.

A Labour spokesperson said: “The Labour Party will always stand up for working people fighting for better pay, terms and conditions at work.

In a statement, Mr Tarry said it has been a “privilege” to serve on Labour’s top team.

“I remain committed to supporting the striking rail workers, and campaigning for a Labour victory at the next general election, which I will fight for relentlessly from the backbenches,” he added.

The move has been widely condemned by union bosses, who have warned the party would be unable to win back Red Wall seats in a general election if it fails to “identify with working class people’s needs.”

Transport Salaried Staffs Association (TSSA) General Secretary Manuel Cortes said the union was “ashamed” of Labour and suggested it was “deluded” to think the party could defeat the Conservatives without the support of union members.

Mr Cortes said: “Sam is one of us. He grew up in the trade union movement and trade unionism is in his blood. Today Sam did the right thing and stood shoulder to shoulder with rail workers striking for fairness and safety at work.

“Whatever excuses the Labour Party makes about the reasons for Sam being sacked, the reality is that Sam has shown solidarity with his class and we applaud him for that.

“The Labour Party needs to wake up and smell the coffee.

“If they think can win the next general election while pushing away seven million trade union members, they are deluded.

“As a Labour-affiliated union, our union is ashamed of the actions of the Labour Party leadership and the anti-worker anti-union message it is sending out.”

RMT boss Mick Lynch told Times Radio that Labour would only be able to reclaim its traditional heartlands if it could “identify with working class people’s needs and their campaigns”.

He too attacked the Labour leader, accusing Sir Keir of “playing up to the agenda of Liz Truss and the right wing press.”

Mr Lynch said: “I think (it’s) a bit of an outrage and I think many Labour Party members, union activists and people are looking for a change.”

John McDonnell also was less than impressed with the move.

He said: “This must be the first Labour MP to be removed from his frontbench position for joining a trade union picket line to support workers.”