Who thought putting 'Hunt's cuts' in a script was a good idea? 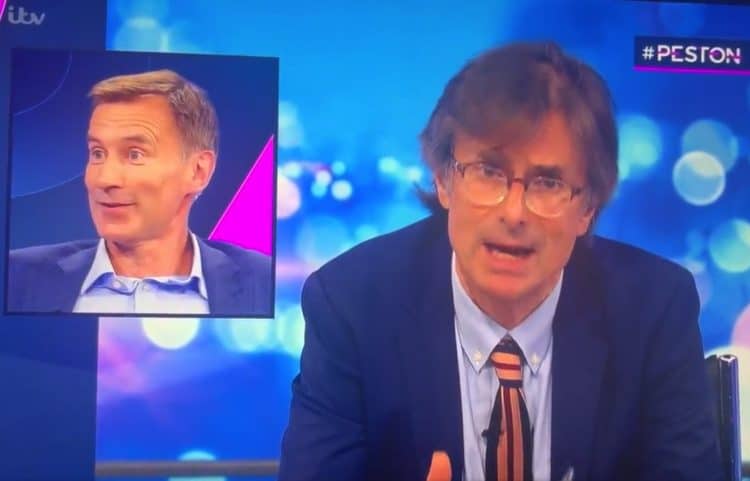 The political editor made the blunder on Wednesday (19 October) as he was giving a summary of the farcical events that had unfolded in the House of Commons that day.

“That means the hole in the public finances is bigger than it would have been, and Jeremy c***’s – Hunt’s – cuts will be more painful,” he said.

Hunt undoubtedly has a name that strikes fear into even the hardiest news reader. Over the years, many have fallen victim to what some may label a Freudian slip, as you can see below…

Peston wasn’t the only news presenter who dropped the C-bomb on Thursday night.

Channel 4 newscaster Krishnan Guru-Murthy had to apologise “unreservedly” to Northern Ireland minister Steve Baker after he was heard saying “what a c***” following an exchange with the Tory MP.

The broadcaster said the remark followed a “robust interview” with Baker but it was “beneath the standards I set myself”.

“I have reached out to Steve Baker to say sorry,” he added.

“I had an interview earlier with a journalist I don’t have a great deal of regard for who I felt was misrepresenting the situation through the construction of his question, which I called out, I think live on air, or I thought it was a pre-record,” he said.

“And he clearly didn’t like that, quite right, too. But I’d be quite honest, I spent a long time live on air, calling him out on his conduct as a journalist and glad to do so any time.

“But it’s most unfortunate that he’s sworn on air like that. If it’s in breach of his code of conduct, I do hope they sack him – it would be a service to the public.”

Baker later replied to Guru-Murthy’s tweet, accepting the apology and saying he “appreciated” the gesture.