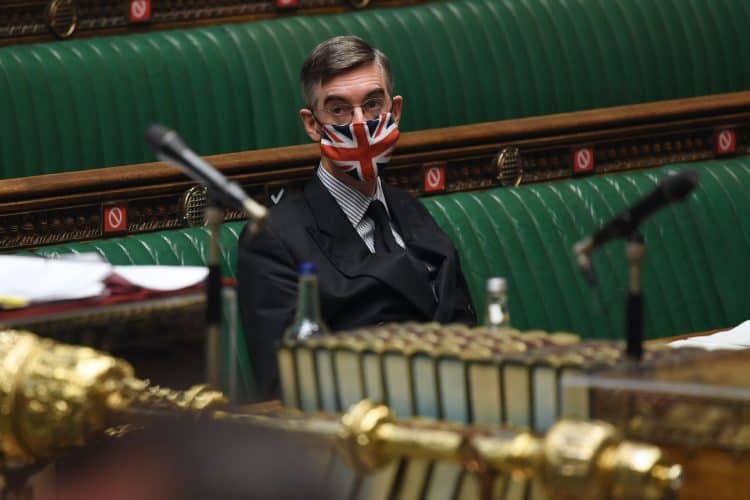 Tory MPs will not wear masks in the House of Commons because they “know each other”, Jacob Rees-Mogg says.

Sajid Javid, the health secretary, suggested on Wednesday that MPs had a responsibility to set an example by wearing masks, as he warned of tougher Covid restrictions if the public’s behaviour does not change.

But, just hours later, Ress-Mogg told MPs: “The advice on crowded spaces is crowded spaces with people that you don’t know – we on this side know each other.”

Javid was faced with accusations of hypocrisy at Wednesday’s press conference, after it was pointed out that he and his colleagues rarely wore masks in Westminster. “I think that’s a very fair point,” the health secretary admitted.

Ducking the question of whether the prime minister would start wearing a mask, a Downing Street spokesman echoed Rees-Mogg, telling journalists: “It remains the case that it’s a matter of personal judgment for all individuals on wearing a mask.

“We have very clear guidance which sets out that people are recommended to wear face coverings in crowded, enclosed spaces where they come into contact with people they do not normally meet.”

Ministers insisted on Thursday that now is not the right time to trigger Plan B, even as Covid infections continue to rise – and a leading virologist warned that the UK is probably already close to recording 100,000 cases per day.

Edward Argar, a health minister, said the government thinks people should still be able to make their own “educated judgments” when it comes to issues such as wearing face masks, adding that Plan A for tackling the virus “is still working”.

He said ministers will not hesitate to bring in further measures if and when they are needed, although the view at the moment is that the pressure on the NHS is at a “sustainable” level.

Dr Chris Smith, from the University of Cambridge, told BBC Breakfast that around half of Covid cases are asymptomatic.

“We are looking very hard, we’re doing more than a million tests a day now, but probably we do have really high levels bordering on that sort of number at the moment.”

On Wednesday evening, Javid urged the public to play its part, saying further restrictions may be needed if people do not take care and get all their Covid jabs and boosters.

Asked how bad the situation in the NHS will have to get before the government moves to Plan B, he said it would not “be appropriate to set an arbitrary figure, X number of infections, X number of hospitalisations”.

“I can’t give you a simple… here is a sort of black and white answer, here is a binary line, because it takes … there’s a whole range of factors we’ll take into consideration.”

Related: Ministers called out for House of Commons mask hypocrisy