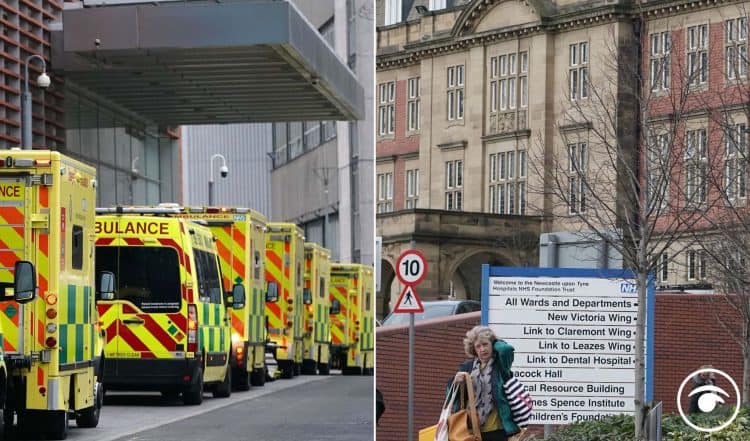 A student paramedic has begged for ‘help’ for the NHS – revealing she was in a queue of 25 ambulances waiting to get into a hospital.

Faye Shepherd made her desperate post on Tuesday from her account @Faye_Shepherd – where she lists herself as ”Student Paramedic @SWASFT”.

Faye wrote: ”Currently 23rd in the queue, out of 25 ambulance crews waiting to enter the emergency department.

Hospital bosses have warned patients of nine-hour waits in its accident and emergency department.

The Newcastle Hospitals Trust said staff at its Royal Victoria Infirmary were trying to cope with patient numbers higher than during the worst winters.

The trust is looking after around 70 Covid-19 patients, up from around 50 for much of the summer, but the main driver was generally sick people coming for treatment.

The trust’s chief executive, Dame Jackie Daniel, has recently said that this demand on services across the board was not a “short-term surge”.

She said the number of people coming for emergency treatment – known as type 1 attendances – had repeatedly broken records.

Dr Chris Gibbons, clinical director of medicine at Newcastle Hospitals Trust, told the BBC: “Our numbers have surpassed anything we’d see in the worst winters.

“The pressures on staff who provide emergency care are like nothing we’ve ever seen before.

“Most days we’re starting with patients in the emergency department waiting for beds.

“Patients can be waiting for eight or nine hours, and waiting to be seen for four, five or six hours in some cases.”

A trust spokeswoman clarified that a nine-hour wait was “an exception, but like services across the region we are extremely challenged”.

Dame Jackie regularly blogs about her work and described the pressure on the trust in her latest post as “intense”.

She wrote: “I know that over the last fortnight everyone has continued to face relentless demand.

“I am deeply concerned about the impact this part of the pandemic is having on everyone, and the subsequent potential effects on patients.

“I don’t think anyone foresaw the sustained increases in attendances that our emergency pathways have experienced in recent weeks.

“We have broken the record of the most type 1 attendances several times, most recently on Monday 11 October when 518 people received care (875 across all types).

“It’s clear that this is not a short-term surge as we had all hoped, and over the past month in particular we have been focused on developing short- and medium-term plans to address our current challenges.”

She outlined plans to deal with the unprecedented demand, adding: “But problems like this are not solved in a boardroom, and I want to pay tribute to all of the work that staff, leaders and managers at every level are doing to support and care for their teams and each other.”