Sajid Javid said MPs should set an example by wearing masks in the Commons - but he rarely dons one himself. 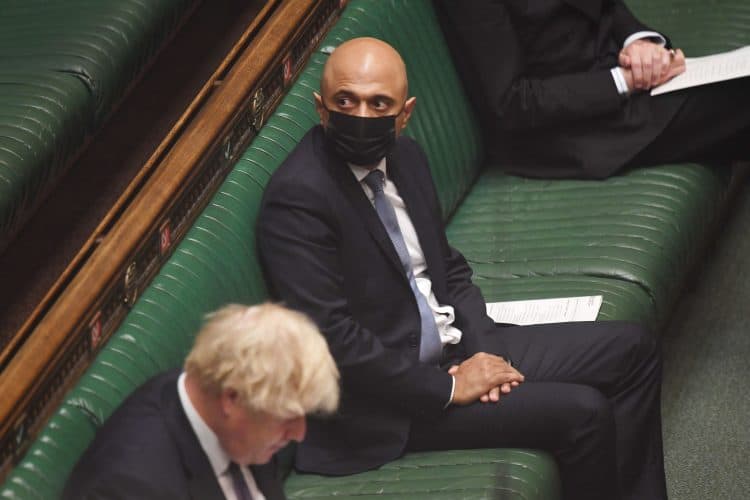 Sajid Javid has said MPs should set an example by wearing face coverings in the House of Commons.

Asked at a Downing Street news conference about Tory MPs not doing so, he suggested politicians should “set an example”.

MPs have not been compelled to use face coverings since parliament eased social distancing measures over the summer.

Earlier this summer, the health secretary claimed he would not wear a face mask on a quiet train – even if there was a sign asking him to.

“If I was on crowded tube in London I would wear a mask,” he told BBC Radio 4’s Today programme in July.

“If I was on the West Coast mainline going up to my constituency and it’s late at night and there are about three people in the carriage, even if it said ‘we recommend a mask’, I wouldn’t wear a mask.”

And, speaking on Times Radio, health minister Edward Argar said individuals should “make their own judgement call” on whether to wear a mask – but claimed he often doesn’t in the Commons because he “forgets”.

Argar insisted now is not the right time to trigger Plan B against rising Covid infections, a health minister has insisted, even as a leading virologist said the UK is probably already close to 100,000 cases per day.

He said the government thinks people should still be able to make their own “educated judgments” when it comes to issues such as wearing face masks, adding that Plan A for tackling the virus “is still working”.

The health minister added the government will not hesitate to bring in further measures if and when they are needed, although the view at the moment is that the pressure on the NHS is at a “sustainable” level.

It came as leading virologist Dr Chris Smith said the UK is probably already close to 100,000 cases a day, while Professor Adam Finn said it is wrong to see the current death toll as acceptable.

Dr Smith, from the University of Cambridge, told BBC Breakfast that around half of Covid cases are asymptomatic.

“We are looking very hard, we’re doing more than a million tests a day now, but probably we do have really high levels bordering on that sort of number at the moment.”

Asked how bad the situation in the NHS will have to get before the government moves to Plan B, he said it would not “be appropriate to set an arbitrary figure, X number of infections, X number of hospitalisations”.

He added: “I can’t give you a simple… here is a sort of black and white answer, here is a binary line, because it takes … there’s a whole range of factors we’ll take into consideration.”