"He just doesn't get it," the Labour leader said of the embattled chancellor. 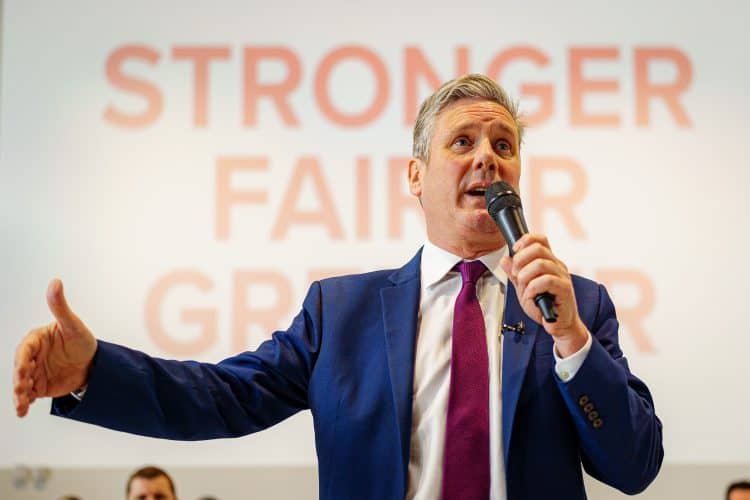 Rishi Sunak is guilty of “rank hypocrisy”, Keir Starmer has said as he questioned the ability of super-rich politicians to relate to the struggles of the public.

Speaking to The Guardian, the Labour leader said having a spouse who was a non-dom would create a “very obvious conflict of interest” for any minister.

And he called on the prime minister to reveal whether any other ministers have taken advantage of non-dom status, used tax havens or benefitted from offshore trusts.

The chancellor has referred himself to the adviser on ministerial interests after it emerged that his wife, Akshata Murthy, holds non-dom status, allowing her to avoid paying UK tax on her foreign earnings.

Sajid Javid, the health secretary, has since admitted to having been a non-dom for six years while a banker, before becoming an MP.

Sir Keir said that Sunak still has “basic” questions to answer about how much tax his family had avoided through Murthy’s arrangements, with estimates suggesting she legally dodged paying £20 million on overseas earnings.

During a campaign visit to Sunderland, Starmer indicated he was uncomfortable with the system of overseas tax status but also did not think politicians should have to publish their own tax returns.

“There is nothing to reveal in my tax returns,” he told The Guardian.

“[But] I can tell you if I was prime minister, I wouldn’t be going to the country saying I want more tax from you but secretly I’m reducing my own tax burden through schemes. It’s rank hypocrisy.”

The former lawyer added that the situation showed there was a “broader issue” with politicians being disconnected from the lives of the public.

“I think that even before we got to the non-dom issue, the chancellor’s response to the spring statement – to the real pressures on people – showed that he just doesn’t get it.”

‘He just doesn’t get it’

The latest attempt to defuse the political storm engulfing the chancellor did not appear to have worked, with the Lib Dems on Monday calling for a standards inquiry.

The party wrote to Kathryn Stone, the Parliamentary commissioner for standards, to ask her to investigate why Sunak did not declare any financial interests from 2015 to 2019 as an MP but revealed the existence of a blind trust when he became a Treasury minister in 2019.

Starmer added: “There’s much more likely to be a conflict of interest. I don’t know many people who have signed up to a non-dom scheme in order to increase their tax. It is pretty obvious why people do it.”

But he said there was a “broader issue” about politicians and their ability to connect with the public.

“I think that even before we got to the non-dom issue, the chancellor’s response to the spring statement, to the real pressures on people, showed that he just doesn’t get it.”

Highlighting Sunak’s personal wealth, Sir Keir said: “You know, whether that’s picking up somebody else’s car, whether it’s four loaves of bread in his own family, whether it’s a number of houses, it’s about whether he gets it.

“It’s about whether you understand, whether you can relate to the very real struggles that people have and the cost of living crisis, and it dominates every discussion we have around the country.”

Related: Watch: Why was Sunak so keen on Brexit? Does this clip give you the answer?