The Royle Family star changed his account to "the Conservative Press Orifice", congratulating Jeremy Corbyn for "clearly winning the debate". 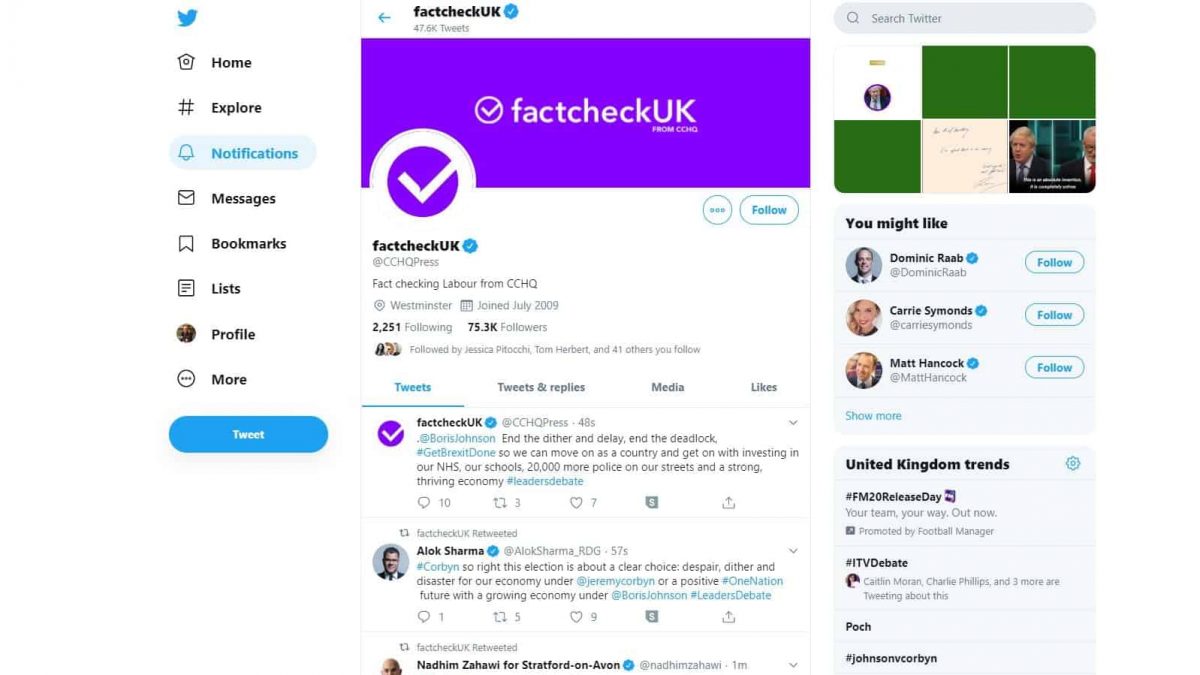 Ralf Little retaliated in style last night after the Conservative party rebranded one of their accounts as a fact-checking service during the ITV leaders’ debate.

The Royle Family star changed his account to “the Conservative Press Orifice” and proceeding to congratulate Jeremy Corbyn for winning the televised contest.

Calling the CCHQPress move “devious and disgusting” he went on to discredit Tory policy under the guise of their own press office, saying things like:

“The Conservatives have a thinly veiled agenda to slowly privatise the NHS. Any basic analysis of the statistics, facts, and literal quotes from high up Conservatives will show this to be true. We now feel the time is right to come out and say it proudly.”

“Claims that Boris Johnson is always lying are categorically untrue. Sometimes his lips are not moving.”

Fact check. Boris Johnson is not telling the truth in this debate.

The Conservative Party faced widespread criticism after one of its official Twitter accounts was rebranded last night.

The move was criticised by independent fact-checking charity Full Fact, which tweeted:

“It is inappropriate and misleading for the Conservative press office to rename their twitter account ‘factcheckUK’ during this debate. Please do not mistake it for an independent fact checking service such as @FullFact, @FactCheck or @FactCheckNI”

“Pretending to be someone else”

The Liberal Democrat press office posted an image suggesting they were reporting the account to Twitter for “pretending to be me or someone else”.

They tweeted: “And people wonder why trust in politics has been eroded @CCHQPress”

Labour’s David Lammy tweeted: “The Conservative Party press office @CCHQPress rebranding themselves as ‘FactCheckUK’ shows what disdain this party and this government has for the truth.”

“The Electoral Commission must investigate and punish this blatant attempt to decieve (sic) the public.”

Meanwhile, some other Twitter users also changed their display names to factcheckUK and posted critical comments about Mr Johnson.

The Twitter display name was changed back to CCHQ Press shortly after the debate ended. The Conservative Party has been contacted for comment.

“The reason we did that is because we were calling out the inaccuracies, the lies that were coming out during the debate. The NHS is not for sale.”

He replied “I disagree” when told the party had been misleading the public, and said the change would have been an idea from the party’s “digital team”.

Asked if he knew about the change, Mr Cleverly said: “The digital team have got a remit, I set that remit, they work within the remit and I’m absolutely comfortable with them calling out when the Labour Party puts what they know to be complete fabrications in the public domain – and we will call that out every time they do it.”