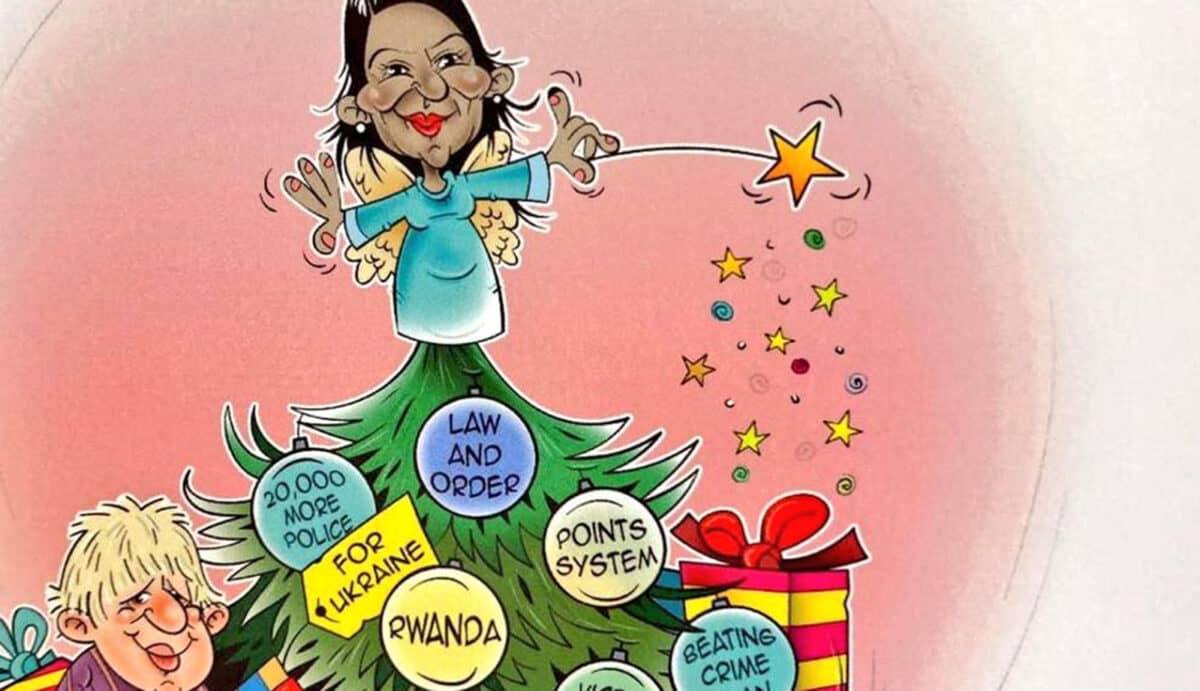 Priti Patel has been criticised for sending out a Christmas card depicting her as a fairy magicking up deportations to Rwanda.

The card, sent out to the former Home Secretary’s political contacts, features a caricature of Patel sitting atop a Christmas Tree with a magic wand.

Lying below her are baubles including a points-based immigration system, “national security”, and “Rwanda” – a reference to her controversial policy of flying asylum seekers to sub-saharan Africa.

The ex Home Secretary is joined on the front page of her bespoke greetings card by Boris Johnson, who is depicted as a child gleefully opening the political presents she has conjured up.

Reacting to the card, Alistair Carmichael, the Liberal Democrats’ home affairs spokesperson, said: “We have seen Priti Patel’s lack of basic human decency time and time again – why should we expect anything less at Christmas time?”

“This is the Christmas card of someone who read the nativity story and thought King Herod had the right idea.

“If Priti Patel had been around, Mary, Joseph and Jesus would have been on their way to Rwanda before the three wise men could arrive.”

Earlier this week The High Court ruled that government plans to deport asylum seekers to Rwanda were lawful.

Challenges were brought against the policy announced by then-home secretary Priti Patel in April, which she described as a “world-first agreement” with the east African nation in a bid to deter migrants from crossing the Channel.

The first deportation flight – due to take off on June 14 – was grounded amid a series of challenges against individual removals and the policy as a whole.

However, at the High Court in London on Monday, senior judges rejected arguments that the plans to provide one-way tickets to the east African nation were unlawful.

Lord Justice Lewis, sitting with Mr Justice Swift, dismissed the challenges against the policy as a whole, but ruled in favour of eight asylum seekers, finding the government had acted wrongly in their individual cases.