Labour said Johnson should go further - and called out Russian donations to the Tory party. 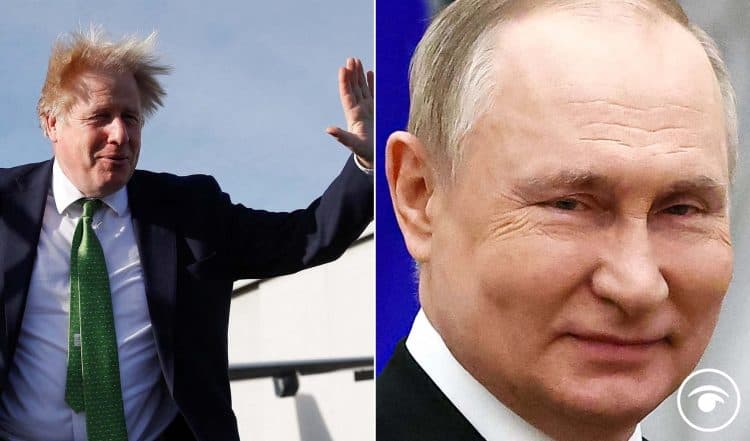 Boris Johnson has unveiled a package of sanctions against Russia, freezing the assets of five major Russian banks and three wealthy individuals.

“This is the first tranche, the first barrage of what we are prepared to do,” the prime minister told MPs.

The sanctioned banks are Rossiya, IS Bank, General Bank, Promsvyazbank and the Black Sea Bank. The three individuals are Gennady Timchenko, Igor Rotenberg and Boris Rotenberg.

Johnson took the steps after Vladimir Putin said Russia would recognise the independence of two breakaway areas in eastern Ukraine.

He did impose the complete package of sanctions the UK has prepared, because Moscow is not yet considered to have invaded sovereign Ukrainian territory.

The European Union is expected to announce its own tough package of measures on Tuesday afternoon.

No major oligarchs based in the UK will be affected by Tuesday’s sanctions – and Labour urged Johnson to go further.

Responding to Johnson in the Commons, Keir Starmer said the UK’s response should not be limited to economic sanctions – and suggested pro-Kremlin TV channel RT should be taken off the air.

He said: “Putin’s campaign of misinformation should be tackled. Russia Today should be prevented from broadcasting its propaganda around the world.”

And, in a clear reference to Russian donations to the Tory party, Starmer added: “Russian money has been allowed to influence our politics. We have to admit that mistakes have been made, we have to rectify them. This must be a time to put an end to oligarch impunity.”

He told the House of Commons: “Yesterday was a dark day for Europe. We must all stand firm in our support for Ukraine. We support the freedom of her people and their right to determine their own future without the gun of an imperialist held to their head.

“There can be no excuses for Russia’s actions. There is no justification for this aggression.”

David Lammy, the shadow foreign secretary, tweeted: “We welcome the sanctions announced today, but we should go further.

“We need to impose a full set of sanctions now. If we do not, Putin will once again take away the message that the benefits of aggression outweigh the costs.”

He said: “In a single inflammatory speech, he denied that Ukraine had any tradition of genuine statehood, claimed that it posed a direct threat to the security of Russia and hurled numerous other false accusations and aspersions.

“The House should be in no doubt that the deployment of these forces in sovereign Ukrainian territory amounts to a renewed invasion of that country.

“And by denying Ukraine’s legitimacy as a state and presenting its very existence as a mortal threat to Russia, Putin is establishing the pretext for a full-scale offensive.”

Earlier on Tuesday, the prime minister said that Russian companies would be prevented from raising money on the London capital markets if a full invasion went ahead – and pledged to unmask Russian beneficial owners hiding behind shell companies and properties.

A total of 31 Russian companies are listed on the London Stock Exchange, with a combined market value of £468 billion, according to data firm S&P Global.