The UNHCR condemned the UK's controversial new plan as "unacceptable" and "abhorrent". 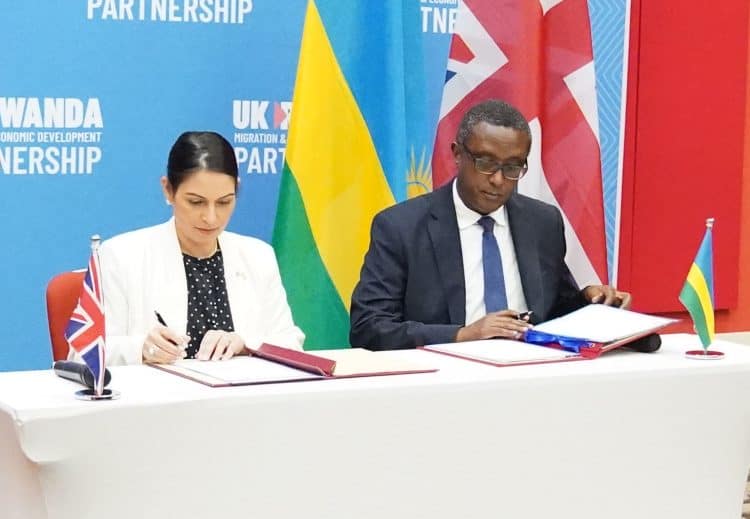 The UK’s proposal to send migrants who arrive in Britain unlawfully to Rwanda is “unacceptable” and a breach of international law, the UN’s refugee agency said.

The government announced this week it plans to provide failed asylum seekers, including those crossing the Channel in small boats, with a one-way ticket to Rwanda, where they will have the right to apply to live in the African country.

Gillian Triggs, an assistant secretary-general at the UNHCR, said the agency “strongly condemns outsourcing the primary responsibility to consider the refugee status”, as laid out in the scheme put forward by Prime Minister Boris Johnson and Home Secretary Priti Patel.

Speaking to BBC Radio 4’s World At One programme, the former president of the Australian Human Rights Commission said the policy was a “troubling development”, particularly in the light of countries taking in millions of Ukrainian refugees displaced by the conflict in eastern Europe.

Put to her that Australia had effectively deployed a similar tactic to cut migration numbers, Triggs said: “My point is, just as the Australian policy is an egregious breach of international law and refugee law and human rights law, so too is this proposal by the United Kingdom government.

“It is very unusual, very few states have tried this, and the purpose is primarily deterrent – and it can be effective, I don’t think we’re denying that.

“But what we’re saying at the UN refugee agency is that there are much more legally effective ways of achieving the same outcome.”

She said attempting to “shift responsibility” for asylum seekers arriving in Britain was “really unacceptable”.

Triggs pointed out that Israel had attempted to send Eritrean and Sudanese refugees to Rwanda, but that they “simply left the country and started the process all over again”.

“In other words, it is not actually a long-term deterrent,” she added.

A Home Office spokesperson said: “Rwanda is a fundamentally safe and secure country with a track record of supporting asylum seekers, including working with the UN Refugee Agency which said the country has a safe and protective environment for refugees.

“This world-leading Migration Partnership will overhaul the UK’s broken asylum system. It means those arriving dangerously, illegally or unnecessarily into the UK can be relocated to have their claims for asylum considered and, if recognised as refugees, to build their lives there.

“Under this agreement, Rwanda will process claims in accordance with the UN Refugee Convention, national and international human rights laws, and will ensure their protection from inhuman and degrading treatment or being returned to the place they originally fled. There is nothing in the UN Refugee Convention which prevents removal to a safe country.”

Tom Pursglove, minister for justice and tackling illegal migration, said on Friday that the policy was “in line” with the UK’s legal obligations.

However, he accepted that it would be “difficult” to implement the plan to remove asylum seekers to Rwanda, with the government braced for legal challenges.

He told Times Radio: “I think what is also really important to make (clear) in dealing with that issue is that, at all times, we act in accordance with our international obligations, the ECHR (European Convention on Human Rights) and the refugee convention.

“We are absolutely confident that our policies are in line with that and entirely compliant, which by extension would mean that those legal challenges would be without merit. But it will be difficult, there will be challenges.”