MEP Terry Reintke also sent out a sobering tweet, saying "tonight so many rights and freedoms come to an end". 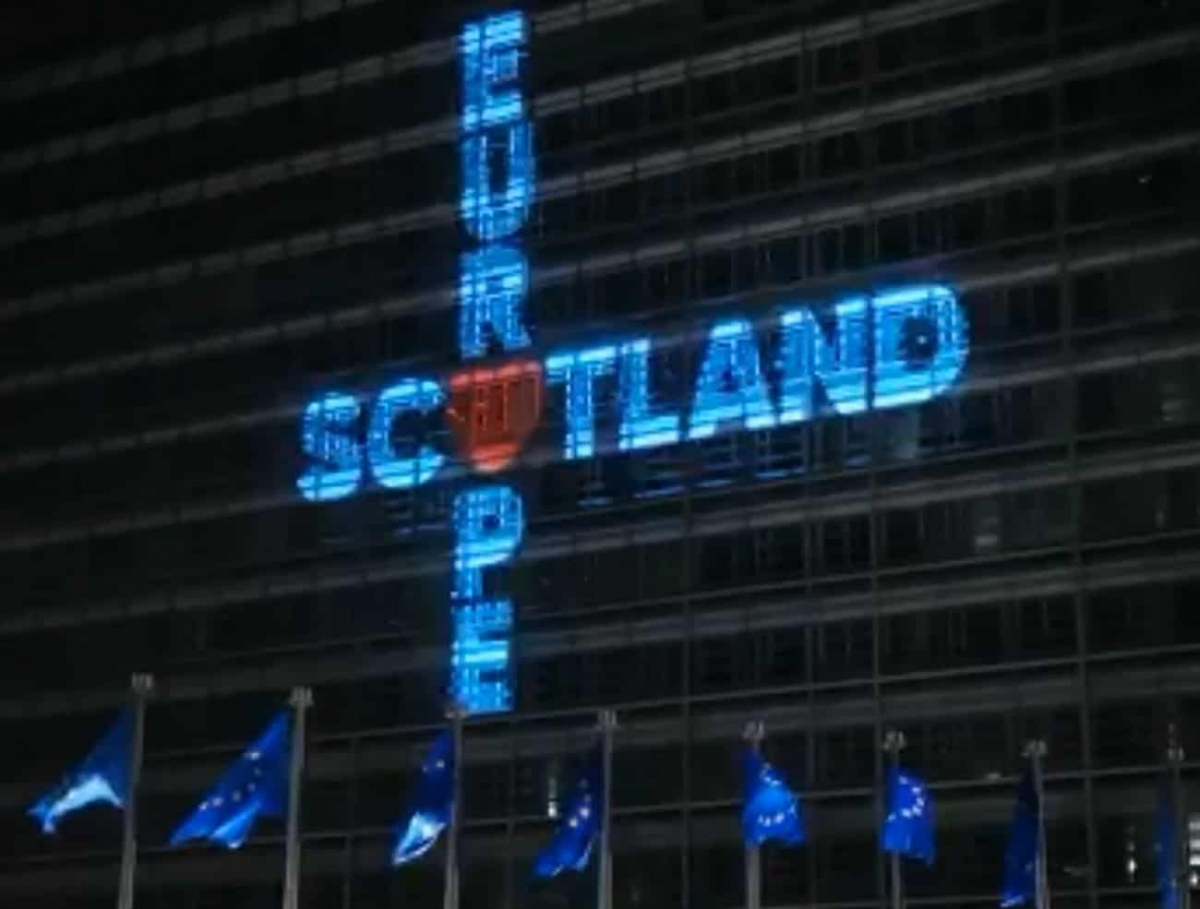 Nicola Sturgeon has said Europe should “keep a light on” as Scotland will be “back soon”.

The First Minister tweeted just after the Brexit transition period formally ended at 11pm on December 31.

Scotland’s trading and travel relationships with EU countries will now be governed by the agreement announced by the UK Government on Christmas Eve.

Ms Sturgeon reiterated the SNP’s call for an independent Scotland to join the EU.

Independence the “only alternative”

Tweeting a picture of the words Europe and Scotland attached by a loveheart, she said: “Scotland will be back soon, Europe. Keep the light on.”

The image had previously been projected on to the side of the EU Commission building in Brussels.

He was reacting to news that a draft agreement had been reached between the UK and Spain to keep the border with the Rock open on January 1 and beyond.

The NI & Gibraltar deals make iclear that the 12/16 @ScotGov proposals could have produced a Scottish deal but were never pursued in EU negotiations by U.K. Consequently the U.K. has itself created the circumstances in which independence is the only alternative for Scotland .

While Scotland has the same trade arrangements with the EU as England and Wales, there is a separate Northern Ireland Protocol to avoid a hard border with the Republic.

Additionally, on December 31 it was announced that Gibraltar would be covered by a separate treaty.

In December 2016, the Scottish Government proposed keeping Scotland in the single market post-Brexit.

Mr Russell tweeted on Thursday evening: “The NI & Gibraltar deals make clear that the 12/16 @ScotGov proposals could have produced a Scottish deal but were never pursued in EU negotiations by UK.

“Consequently the UK has itself created the circumstances in which independence is the only alternative for Scotland.”

The Scottish Parliament earlier refused to give legislative consent for the Prime Minister’s Brexit agreement.

MSPs voted by 92 to 30 to say the deal would “cause severe damage to Scotland’s environmental, economic and social interests”, following a debate on Wednesday.

A Scottish Government report released earlier modelled that GDP would be 6.1% lower by 2030 compared to remaining a member of the EU.

However, the Conservatives accused the SNP of hypocrisy for refusing to back the Prime Minister’s deal when it had opposed a no-deal Brexit.

On Thursday, they said the Scottish Government had been spreading “propaganda” about the agreement on its official channels.

Scotland didn’t vote to leave the EU, but we will work hard to mitigate the worst effects of #Brexit.

Here’s what it means for Scotland ⬇

“Dragged out against our will”

Mr Ross said: “This video is a work of shameless propaganda and it’s incredible that a politically neutral civil service would think it is in any way appropriate.

“For taxpayers to be bankrolling a work of one-sided Nationalist distortion is not on.

“The government is supposed to represent everyone in Scotland.”

He said Scottish business groups had welcomed the trade deal between the UK and the EU.

Demonstrators gathered outside Holyrood on Thursday afternoon to protest against the end of the transition period.

Around 12 people took part in the socially distanced Yes for EU event.

Morag Williamson, from the group, said: “We are very sad and very angry at the same time.

“We don’t want to leave the family of Europe – but we are being dragged out against our will.”

A hard day for millions of citizens in the UK

Elsewhere Green MEP Terry Reintke tweeted that this would be a “hard day for million of citizens in the UK”.

I know this is a hard day for millions of citizens in the UK.

Tonight so many rights and freedoms come to an end.

Looking ahead, I pledge to still have you in my mind when taking decisions in the European Parliament.

Never forget: We will always be stronger together.

Andrew Adonis posted that the “campaign for Britain to rejoin Europe” starts today, while Owen Jones looked ahead to 2021 with a call to arms.

The campaign for Britain to rejoin Europe starts at midnight