Chancellor-in-waiting Olaf Scholz said Berlin would back "countermeasures" if the UK reneges on the Brexit deal. 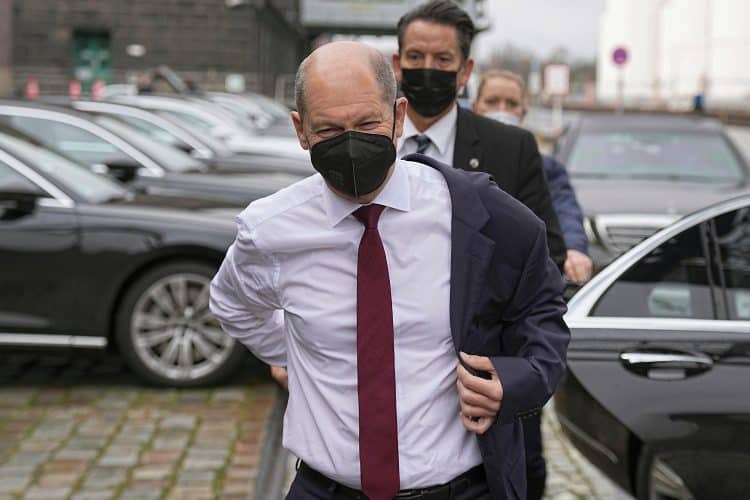 The newly-formed German government has warned Boris Johnson it will retaliate if the UK breaches the Brexit agreement.

It comes just weeks after France threatened “retaliatory action” for a bitter row over fishing rights, with Berlin upset at Britain’s threats invoke Article 16 of the Northern Ireland Protocol.

Johnson has told Irish counterpart Micheal Martin that he would have “no choice” but to do so if talks between Brexit minister David Frost and the EU does not “deliver a rebalanced and sustainable outcome soon”.

But the new German government, which will see Social Democrat Olaf Scholz replace Angela Merkel as chancellor in a so-called ‘traffic light’ coalition with the Greens and liberals, backs “countermeasures” if the UK does not respect what was agreed.

The punishment would come in the form of a “common European policy towards the United Kingdom” and would look for a “close bilateral cooperation within this framework”.

“We insist on full compliance with the agreements that have been concluded, in particular with regard to the Northern Ireland Protocol and the Good Friday Agreement,” the coalition said.

They added: “In the event of non-compliance with the agreed standards and procedures, we are committed to the consistent application of all agreed measures and countermeasures.”

The UK recently backtracked on its plans to suspend the Protocol amid fears of a trade war with the EU, a move which Brussels praised as a “welcome change of tone” as it increased focus on medicines and customs bureaucracy.

Despite London rejecting a number of proposals from Brussels, Frost said that the UK could still trigger Article 16 if the EU does not give in to Britain’s demands over the ongoing role played by European judges in overseeing dispute over the Protocol.

A Downing Street spokesperson said: “The prime minister raised his ongoing concern about the substantial distance between the UK and EU positions when it comes to resolving the issues with the Northern Ireland Protocol.

“The Protocol was rightly keeping North-South trade open but its implementation was damaging the much larger East-West dimension. We could not allow a situation to develop in which the government was unable to provide economic support to Northern Ireland in the same way it could in the rest of the UK.

“Ultimately Northern Ireland’s place in the UK internal market was crucial to its long-term prosperity and could not be damaged.

“The implementation of the Protocol was now colliding with economic and political realities and significant change was necessary. The Court of Justice (CJEU) was part of this fundamental imbalance because disputes were decided in the court of one party.”

In September, France threatened “retaliatory action” after it accused the UK for “taking French fishing hostage”.