The prime minister’s working majority of around 80 MPs was slashed to 26, with the former justice secretary urging ministers to "look again" at the issue. 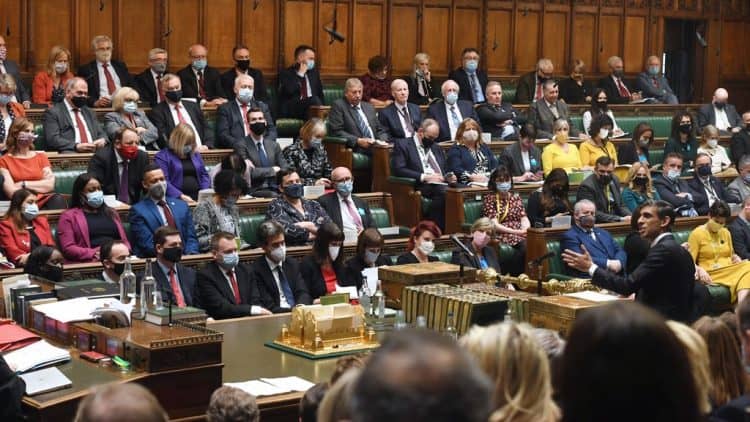 Boris Johnson narrowly succeeded in getting the Commons to back a change to social care reforms despite a sizeable Tory rebellion over concerns it will hit poorer pensioners.

Senior Conservative MPs warned they would not back the new policy to cap care costs in England, which critics argued had been watered down to be less generous.

Ministers were unable to say whether the change to the £86,000 cap on care costs would fulfil an election pledge to guarantee no-one would have to sell their home to pay for care.

And backbench Tory critics joined experts and Labour MPs in warning the move to count only individual payments towards the cap, and not local authority contributions, would cost poorer recipients more in assets than the wealthy.

The Government worked to see off a potential defeat in the Commons on Monday evening and MPs backed the amendment 272 votes to 246, majority 26.

But the Prime Minister’s working majority of around 80 MPs was slashed.

Mr Johnson had defended the plans as “incredibly generous” and “much better than the existing system” during a speech at the annual CBI conference earlier in the day.

In September, the Government announced that a £86,000 cap on lifetime care costs will be put into place from October 2023.

However, a policy paper last week showed that only personal contributions will count towards that cap for people who receive financial support from a local authority for some of their care.

Experts said that means poorer individuals will reach the cap faster than those who are wealthier and will therefore see more of their assets eaten up by care costs.

The Resolution Foundation think tank warned that people in the North and in Yorkshire are most at risk from having their “wealth wiped out by care costs”, and said the changes approved on Monday would make the reforms worse.

Amid lingering anger on the Tory backbenchers over the handling of the Owen Paterson sleaze row, former chief whip Mark Harper said he would be among those opposing the amendment.

He warned it “potentially disadvantages the less well-off and those of working age with life-long conditions”.

Former justice secretary Robert Buckland urged ministers to “look again” at the issue, and Bury South MP Christian Wakeford said he was uncomfortable with the change “to move the goalposts”.

“Especially when one of the main messages for introducing this levy was ‘You won’t need to sell your house for care’, to get to a point where unfortunately you might need to and (it’s) arguably our least well-off in society, our least well-off voters – again, it’s not something I’m particularly comfortable with,” he told Times Radio.

Labour’s analysis suggested the changes mean the average homeowner in two-thirds of northern areas will have to pay more towards their care, while a third in the Midlands will be worse off.

The Conservative Party manifesto for the 2019 general election said social care reforms must “guarantee that no-one needing care has to sell their home to pay for it”.

But the Prime Minister’s official spokesman was unable to say whether people may still have to sell their homes to pay for care, arguing: “I can’t predict individual situations.”

“Instead they voted to tax ordinary working people, while the wealthiest in our country are unaffected,” the Labour MP said.

MPs have another opportunity to debate the amended Health and Care Bill on Tuesday before it is expected to receive extended scrutiny in the House of Lords.