The government's flagship Levelling Up white paper will finally be published this week. 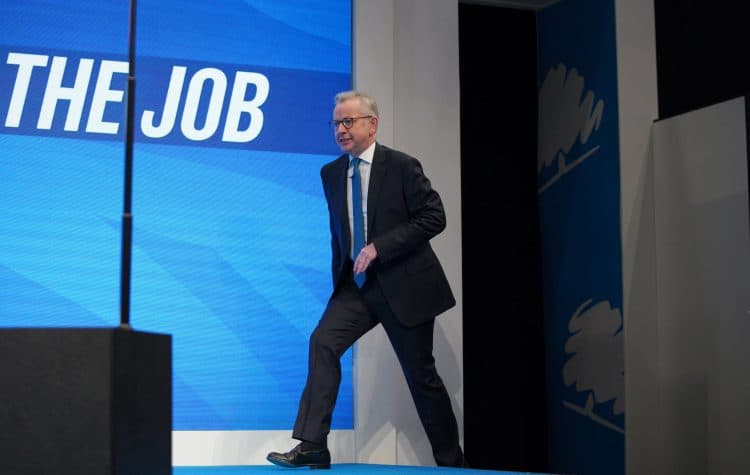 Michael Gove, the Levelling Up secretary, thinks Boris Johnson’s flagship Levelling Up white paper is “sh*t”, it has emerged.

Gove is set to launch the government’s blueprint for addressing regional inequality in a speech on Wednesday.

Early details of the plans, including a “radical new regeneration programme” that would see areas prioritised for a £1.5 billion Brownfield Fund, were criticised this weekend after it emerged that the money pledged was not new investment.

And according to some reports, even those responsible for the white paper believes it falls well short of Johnson’s vow to “level up the country”.

“Everyone, including the Secretary of State [Gove], thinks it’s s**t”, a government insider told i.

The white paper reportedly contains an essay written by ex-Bank of England economist Andy Haldane, who leads the government’s Levelling Up Taskforce. It has been described as “interesting – but it’s just an essay”.

The final chapter is entitled “Policy”, and covers a range of proposals to level up Britain – but sources told the newspaper there is “not much meat in it”.

The white paper is believed to include the government’s much-mocked obesity strategy, with one source dubbing the plan “Gove’s war on Greggs”.

And the regeneration funding across England is “very small beer”, Labour MP Lisa Nandy has argued.

The shadow levelling up secretary said the government’s approach is “downright insulting”, adding that the White Paper “frankly doesn’t appear to be worth the paper that it’s written on”.

Wolverhampton and Sheffield will be the first of 20 areas selected to benefit from a “radical new regeneration programme” launched by the Department for Levelling Up, Housing and Communities (DLUHC).

The chosen locations will be prioritised for a £1.5 billion Brownfield Fund made available from April 2022.

It is part of a £1.8 billion sum for brownfield regeneration promised by Chancellor Rishi Sunak at the last Budget.

Nandy told Sky News’s Trevor Phillips on Sunday: “We welcome the small pots of money that have been announced for 20 places today; that’s a small refund on the amount that we’ve lost since the prime minister took office, and I think those 20 places will be glad to have any penny back that they can get, because any penny counts.

“But I think there is a profound sense that the government has really missed the point with the very small beer that they’ve given us this morning. They’ve got to get money back into people’s pockets.

“Right across this country, town centres are not thriving, high streets are falling apart because not only have we seen good wages, good jobs, depart from many parts of the country over recent decades, it’s been turbo-charged in the last 10 years and right now energy bills are going up, shopping prices are sky high and people are about to face a tax hike.”

Nandy branded the plans “regeneration on the cheap”.

She told Times Radio: “King’s Cross-style regeneration they’re calling it, but King’s Cross cost £3 billion to redevelop, the government’s stake in it alone was worth more than three times as much as the money that has been allocated to a few parts of the country this morning.

“Essentially what they’re saying is you can do regeneration on the cheap while we (plough) large sums of your money into one very small corner of the country.

“That’s not just missing the point actually, that’s downright insulting to people who have a contribution to make, who have huge ambition for their communities, but are watching their town centres fall apart and their young people have to get out in order to get on.”