The announcement follows the departure of Dominic Cummings and Lee Cain from Downing Street this week. 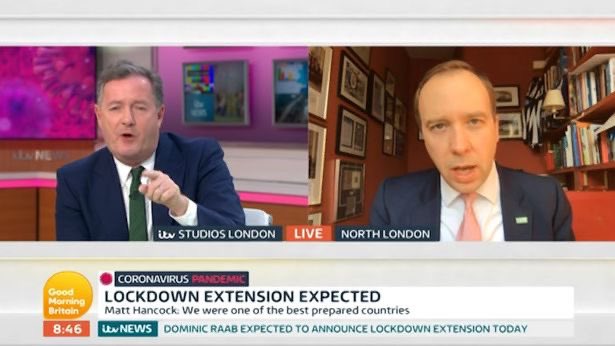 A Government “boycott” of ITV’s Good Morning Britain will end on Monday, with Health Secretary Matt Hancock due to appear on the programme.

Mr Hancock’s scheduled appearance on Monday will be the first by a member of the Government since April.

Presenter Piers Morgan said in a tweet: “BREAKING: Just had a call from Downing Street. The 201-day Government boycott of @GMB is over & Health Secretary @MattHancock will be appearing on the show tomorrow morning.”

BREAKING: Just had a call from Downing Street. The 201-day Government boycott of @GMB is over & Health Secretary @MattHancock will be appearing on the show tomorrow morning… pic.twitter.com/zDLWi0LkFp

Morgan had previously accused the Government of “cowardice” for not fielding members of the Cabinet for questioning.

Last month, Scottish First Minister Nicola Sturgeon said it was “pretty disgraceful” for UK Government ministers to refuse to appear on a breakfast TV show during the coronavirus pandemic, when she appeared on the show.