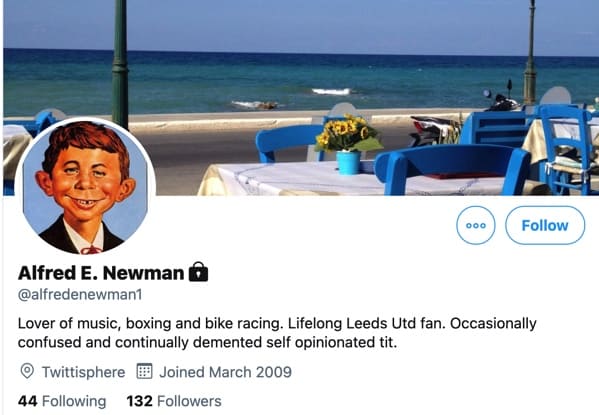 Donald Trump accidentally tagged a “lifelong Leeds United fan” who describes himself as an “occasionally confused and continually demented self opinionated tit” in a Twitter rant today.

Posting this morning Donald Trump said: “This is why @FoxNews daytime and weekend daytime have lost their ratings. They are abysmal having (Mayor Pete of Indiana’s most unsuccessful city, by far!) on more than Republicans.”

But rather than tagging Pete Buttigieg, an American politician who is referred to by the fictitious mascot Alfred E. Neuman, he tagged the account of a humble Yorkshireman.

People were quick to spot the blunder, with one person saying: “You tagged a random Leeds United fan from England. Can you kind of retract this or something?”

Another Twitter user added: “Did you tag a random Leeds fan because you saw the ‘Leeds would’ve taken more’ memes and want them for your rallies?”

This is why @FoxNews daytime and weekend daytime have lost their ratings. They are abysmal having @alfredenewman1 (Mayor Pete of Indiana’s most unsuccessful city, by far!) on more than Republicans. Many great alternatives are forming & exist. Try @OANN & @newsmax, among others! https://t.co/ewHE8GBRNy