The 'landmark agreement' will create a new trading structure in the region, revitalising supply chains disrupted by Covid-19. 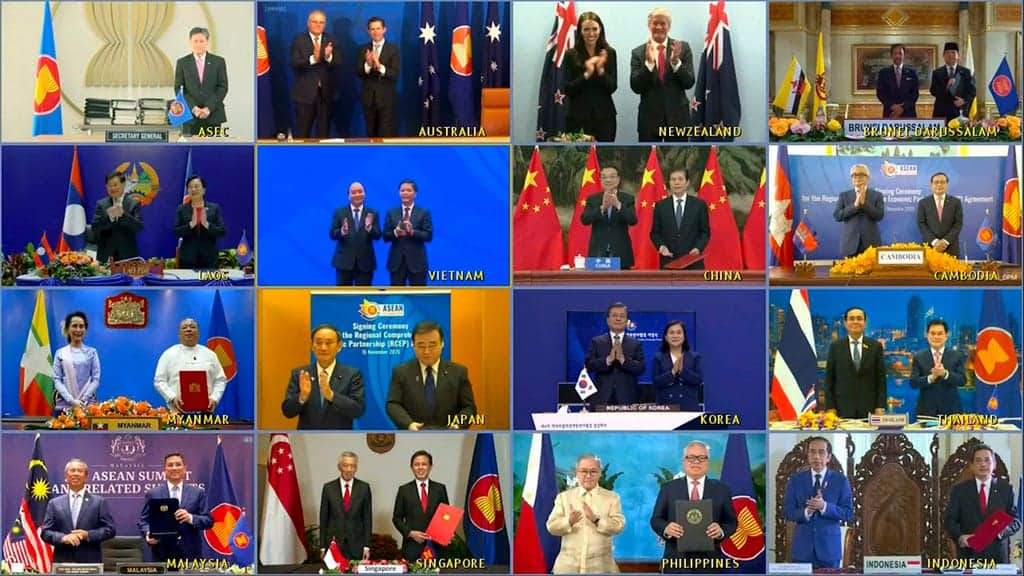 British diplomats will arrive in Brussels this weekend to news that China and 14 other countries have agreed to set up the world’s largest trading bloc, encompassing nearly a third of all economic activity, in a deal many in Asia are hoping will help hasten a recovery from the shocks of the coronavirus pandemic.

The Regional Comprehensive Economic Partnership, or RCEP, was signed virtually on Sunday on the sidelines of the annual summit of the 10-nation Association of Southeast Asian Nations (ASEAN), hosted by Vietnam.

“I am delighted to say that after eight years of hard work, as of today, we have officially brought RCEP negotiations to a conclusion for signing,” said host country Vietnam’s prime minister Nguyen Xuan Phuc.

“The conclusion of RCEP negotiation, the largest free trade agreement in the world, will send a strong message that affirms ASEAN’s leading role in supporting the multilateral trading system, creating a new trading structure in the region, enabling sustainable trade facilitation, revitalising the supply chains disrupted by Covid-19 and assisting the post-pandemic recovery,” Mr Phuc said.

The accord will take already low tariffs on trade between member countries still lower, over time, and is less comprehensive than an 11-nation trans-Pacific trade deal that US president Donald Trump pulled out of shortly after taking office.

Apart from the 10-member ASEAN, it includes China, Japan, South Korea, Australia and New Zealand, but not the United States.

Officials said the accord leaves the door open for India, which dropped out due to fierce domestic opposition to its market-opening requirements, to rejoin the bloc.

It is not expected to go as far as the European Union in integrating member economies but does build on existing free trade arrangements.

The deal has powerful symbolic ramifications, showing that nearly four years after Mr Trump launched his “America first” policy of forging trade deals with individual countries, Asia remains committed to multi-nation efforts towards freer trade that are seen as a formula for future prosperity.

Ahead of Sunday’s RCEP “special summit” meeting, Japanese prime minister Yoshihide Suga said he would firmly convey his government’s support for “broadening a free and fair economic zone, including a possibility of India’s future return to the deal, and hope to gain support from the other countries”.

The accord is also a coup for China, by far the biggest market in the region with more than 1.3 billion people, allowing Beijing to cast itself as a “champion of globalisation and multilateral co-operation” and giving it greater influence over rules governing regional trade, said Gareth Leather, senior Asian economist for Capital Economics.

“The signing of the RCEP is not only a landmark achievement of East Asian regional co-operation, but also a victory of multilateralism and free trade,” Mr Li said.