Professor Peter Openshaw said maskless Tories in the House showed how the issue has been politicised. 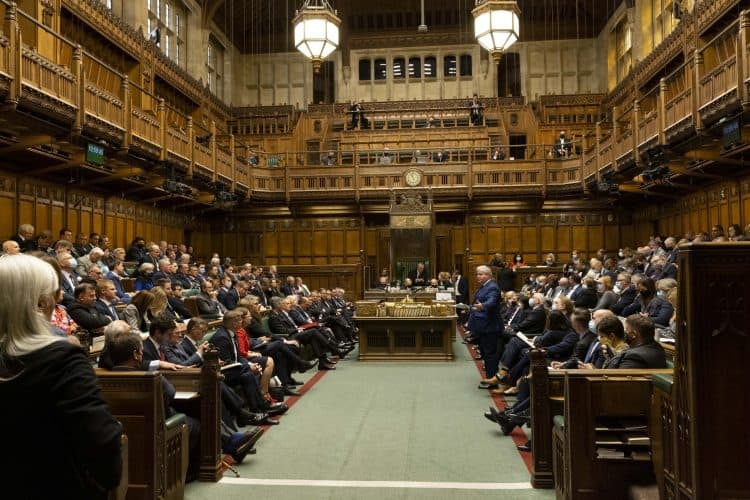 Maskless Tory MPs sitting across from a majority of opposition politicians wearing face coverings in a packed Parliament “illustrates very starkly” how the issue has become politicised, an expert said.

Professor Peter Openshaw, a member of the New and Emerging Respiratory Virus Threats Advisory Group (Nervtag), which advises the government, insisted it is something that “really should not be a political topic”.

He said the situation in the Commons chamber, which on Wednesday was at its busiest since March 2020 and saw MPs sitting shoulder to shoulder, “clearly” comes under the government guidance, which states that face coverings are recommended in crowded and enclosed spaces.

Most people on the opposition benches during the hours-long debate on Afghanistan wore face coverings, while the vast majority on the Conservative side, including Boris Johnson and Health Secretary Sajid Javid, did not.

Professor Openshaw, who is professor of experimental medicine at Imperial College London, said high Covid-19 case numbers and deaths in the UK are “very worrying” and warned that “we just don’t really know what’s going to happen” as winter approaches.

But he said he thinks the government would be “very loath” to bring restrictions back. He told Times Radio: “There seems to be an increasing political polarisation.

“From the scenes in the Commons, with the Conservatives not wearing masks and, on the Labour benches, everyone wearing masks, I think that just illustrates very starkly the politicisation of this issue, which really should not be a political topic.”

He added: “I think what was evident in those crowded conditions in the House of Commons, clearly fell into the guidance which is being given by the government, which is that you should wear masks in crowded spaces.”

The prime minister’s official spokesman said on Wednesday that the situation in the Commons was a matter for the parliamentary authorities, but added that the advice “still remains” that face coverings should be worn in crowded indoor spaces.

Professor Openshaw acknowledged that the government is “under a lot of pressure” from business leaders for a return to normal life.

Asked if the public is getting mixed messages, he said: “I think also the government is getting different messages from different quarters.

“The message that is coming through from the scientists, I hope, is one of continued caution, but of course they’re under a lot of pressure from many who represent vital businesses that, actually, we’ve got to get on and return to normal life, and I don’t envy the government having to balance these very, very loud voices from different sides.”

He said he also has concerns that enthusiasm for vaccination – which has so far seen around three-quarters of adults in the UK double-jabbed – might wane.

“I think, again coming back to the politicisation, I think there is a risk that it will become more of a political issue and the very, very high rates of public enthusiasm about vaccines may wane, if they (the public) listen to the social media campaigns which are coming from those who detract from the benefits of vaccination.”

He said it is “absolutely clear that vaccines do work”, especially against the most severe forms of disease, adding that “the best way out of this” is for countries to get a very high level of vaccination.