What is she thinking? Nadine Dorries has sparked an almighty backlash on Sunday, after she shared a highly-controversial meme. 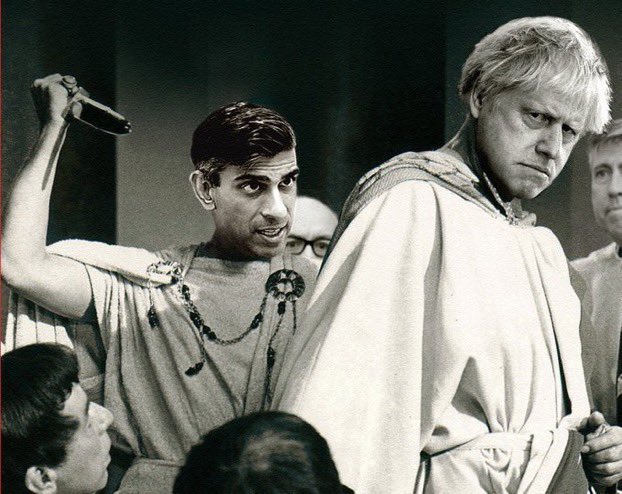 It’s the kind of behaviour we have come to expect during the Tory leadership race: However, it’s somewhat concerning that this latest crass act has come from front-bencher who didn’t even run for the top job. Now, Nadine Dorries is facing a backlash.

The UK’s Secretary of State shared a meme that has been described as both ‘dangerous and appalling’ by one senior Conservative MP. Another has openly told Dorries to ‘wind her neck in’.

Retweeting a post made on Friday, the minister brought a very sinister message to her timeline.

The offending meme shows Rishi Sunak literally stabbing Boris Johnson in the back, a reference to the infamous death of Julius Caesar. The blood-covered knife is held by the former chancellor – who is currently duelling it out with Liz Truss to become Britain’s next Prime Minister.

You can see the picture in question here. It really is quite something…

Greg Hands was the first high-ranking Tory to speak about about Dorries’ online mishap. As a Sunak supporter himself, he found the post absurd – and appeared on Sky News this morning to denounce the bitter response.

He told the broadcaster that, given fellow MP David Amess was stabbed to death less than one year ago, the meme was ‘in very bad taste’. He has also laid down the gauntlet for Liz Truss…

According to Hands, the only appropriate course of action is for Sunak’s opposition candidate to come out and ‘disown’ what Nadine Dorries has shared – therefore distancing herself from the divisive content.

“I’m sure Liz Truss would disown this kind of behaviour. It’s appalling. Not even a year after David Amess was stabbed at his Southend constituency surgery. This is in very very bad taste, and you could even call it dangerous.”

Robert Buckland, the Welsh Secretary, has also voiced his dismay: The top Tory told BBC Radio Wales that the imagery was ‘incendiary and wrong’. He also dragged Nadine Dorries for prioritising arguments about clothes over more significant issues.

“I think that sort of imagery and narrative is not just incendiary, it’s wrong. It’s time for those who think that an argument about Prada shoes or earrings is more important, for instance, should wind their neck in and let people talk about the issues rather than the personality.”