It could just be the pilot drawing a phallic-shaped object for the benefit of FlightRadar viewers, Mikey Smith pointed out. 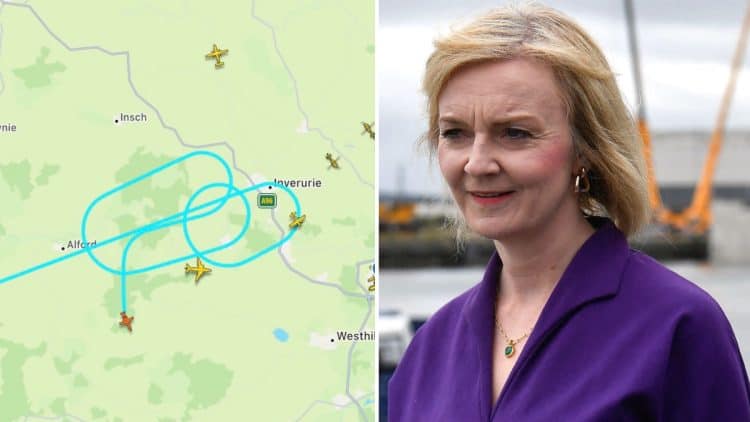 Liz Truss’s flight to Aberdeen was stuck mid-air at 13,000ft over the Scottish city as her tenure as prime minister got off to a turbulent start.

The Tory leadership winner tailed Boris Johnson in a separate private jet as she flew to visit the Queen in Balmoral.

Johnson’s Dassault Falcon 900LX left RAF Northolt at 8.30am and landed at Aberdeen at 9.30am.

The outgoing PM left a little while before Liz Truss, who travelled on a separate plane due to security reasons.

But Truss struggled to land at Aberdeen in what several people have deemed to be a bad omen for her tenure in the top position.

Guardian reporter Jim Waterson questioned what the constitutional implications of Truss being stuck were, to which Marina Hyde, of the same newspaper, responded: “Arguably quite positive”.

Mirror reporter Mikey Smith chimed in, suggesting the pilot may be drawing a phallic-shaped object for the benefit of FlightRadar viewers.

Others suggested the route sums up her views on Brexit, given that she had flip-flopped on the matter quite significantly over the ages.