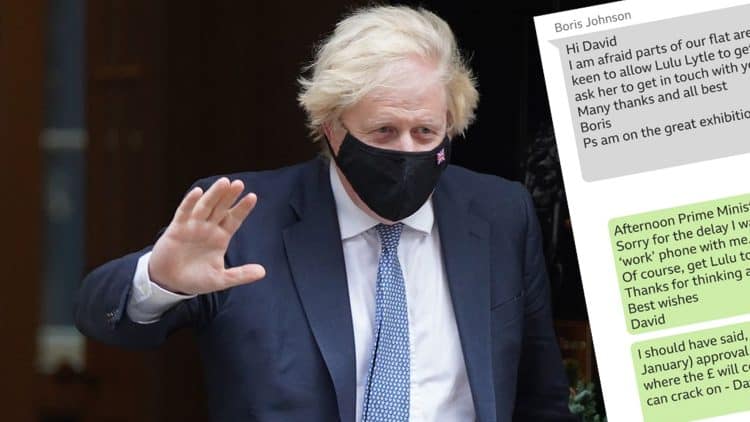 Boris Johnson is facing new questions over his apparent support for a “great exhibition” plan backed by a Tory donor who helped pay for the refurbishment of his Downing Street flat.

Whatsapp messages released on Thursday showed the Prime Minister discussed the proposal with Lord Brownlow while at the same time as requesting his help with the £112,000 revamp of his official residence.

Downing Street said the proposal for a “Great Exhibition 2.0” was not taken forward although the Government is going ahead with Festival UK which was first announced in 2018.

However ministerial records show that just two months after Mr Johnson’s exchanges with Lord Brownlow, the peer attended a meeting with the then culture secretary Oliver Dowden to discuss his Great Exhibition 2.0 proposal.

Labour said that if Lord Brownlow had access to senior ministers because he was footing the bill for the refurbishment work it was “corruption plain and simple”.

On Thursday Mr Johnson was forced to issue a “humble and sincere apology” to his standards adviser, Lord Geidt, after he failed to inform him of the exchange with Lord Brownlow when he carried out an investigation into the funding of work last year.

Mr Johnson said he did not recall the exchanges and that the messages were on an old mobile phone which he no longer had access to.

Downing Street had hoped finally to draw a line under the matter after Lord Geidt said it would not have changed his conclusion that Mr Johnson did not breach the Ministerial Code, although he made clear his deep unhappiness at the way the issue had been handled.

The Prime Minister said after he learned the work – which far exceeded the official £30,000 allowance – had been paid for by the Conservative Party, including a donation by Lord Brownlow, he reimbursed the costs from his own pocket.

However Labour believes the disclosure about the Great Exhibition proposal gives them fresh ammunition to keep the controversy alive.

In a Whatsapp message sent on November 29 2020, Mr Johnson asked Lord Brownlow – who was supposed to be heading up a charitable trust to take over the maintenance of the flat – if he would give his approval for the interior designer Lulu Lytle to begin work.

He added: “Ps am on the great exhibition plan Will revert.”

The peer said he would sort the flat “ASAP”, adding: “Thanks for thinking about GE2”.

On January 18 2021, Lord Brownlow attended the meeting with Mr Dowden and representatives of the Albert Hall to discuss the peer’s Great Exhibition 2.0 proposal.

Labour’s deputy leader Angela Rayner said: “It appears that Lord Brownlow had access to the Prime Minister and Culture Secretary because he was paying for his luxury flat renovations.

“It is pretty unbelievable that Boris Johnson didn’t know who was paying for his luxury flat renovations.

“If so, that is corruption plain and simple. No-one should be able to buy access or exchange wallpaper for festivals. Boris Johnson has serious questions to answer.”

In a statement, a No 10 spokesman said: “All prime ministers and ministers have proposals put to them at various points and ministers also meet stakeholders regularly as part of their engagement on an array of issues.

“In line with normal practice, this idea was referred to the relevant department, considered and ultimately not taken forward by the Government.

“The Government is taking forward Festival UK this year, which was confirmed in 2018, re-affirmed in the 2019 manifesto and is a cultural programme of events, called ‘Unboxed’, on arts, design and technology which will span the whole of the UK.”