The former prime minister has asked multiple Conservative MPs to hold off on their peerage so they do not trigger by-elections. 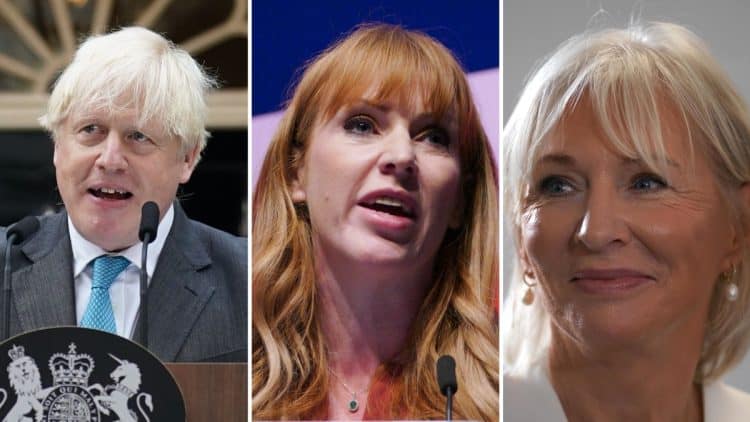 Rishi Sunak is facing calls to block Boris Johnson’s “conveyor belt of cronies” after he proposed several Conservative MPs for peerages but told them to delay accepting them to prevent triggering by-elections.

But the PA news agency has been told that they have all agreed to Mr Johnson’s request to hold off on taking their seats in the House of Lords to prevent perilous by-elections for Mr Sunak.

Ms Rayner said: “This disgraced ex-prime minister’s plot to dodge democracy by trying to reward his MP lackeys with promised jobs for life in the House of Lords yet again puts the Tory Party’s interests before the public’s.

“This underhand attempt to game the system by installing a conveyor belt of cronies and skewing Parliament in the Tories’ favour for decades to come should never see the light of day.

“Rishi Sunak should make it clear in no uncertain terms that he will refuse to do Boris Johnson’s bidding and reject his disreputable demands.”

But Downing Street indicated Mr Sunak would not be intervening.

“There’s a long-standing convention that Prime Ministers do not seek to intervene in former prime ministers’ resignation honours lists, that’s been a case under successive governments,” the Prime Minister’s official spokesman said.

“The Prime Minister is of the view that he will approach it as has been the case of successive governments.”

With Tory polling having plummeted, Mr Jack remaining in the Commons would save Tories the battle of retaining his Dumfries and Galloway, which he won at the last general election with less than 2,000 votes over the SNP.

Mr Sharma retained his Reading West seat in 2019 by a little over 4,000 votes from Labour, and with the Tories’ polling having plummeted they would be fearful of losing it.

Sources close to Mr Johnson did not deny a report in the Times stating his former chief of staff Dan Rosenfield, deputy Ben Gascoigne and advisers Ross Kempsell and Charlotte Owen will get seats in the Lords.

Shaun Bailey, the former London mayoral candidate who faced a backlash for attending a mid-lockdown Christmas party, was also said to be on the former prime minister’s list.

Work and Pensions Secretary Mel Stride backed reforms of the Lords, including to its swelling size, but Downing Street said changes are not a “priority” for the Government.

He told Times Radio: “The House of Commons probably, as a body generally, would not be happy with the size of the House of Lords, the fact that… what is effectively an undemocratic body perhaps has a role in certain areas that it does.

“If your question is does the… House of Lords need reform? I think absolutely.

“Not least to the point you’re making – its size, which has now grown to, I think, over 800 members, which is larger than the Chinese Communist Party’s central committee.”

The Prime Minister’s official spokesman said the Lords “plays an important and valuable role in scrutinising and revising legislation”.

“We are committed to looking at the role of the Lords but it needs to be carefully considered in the round,” he added.

“Further reform is not an immediate priority as we tackle some of the issues that the UK faces.”