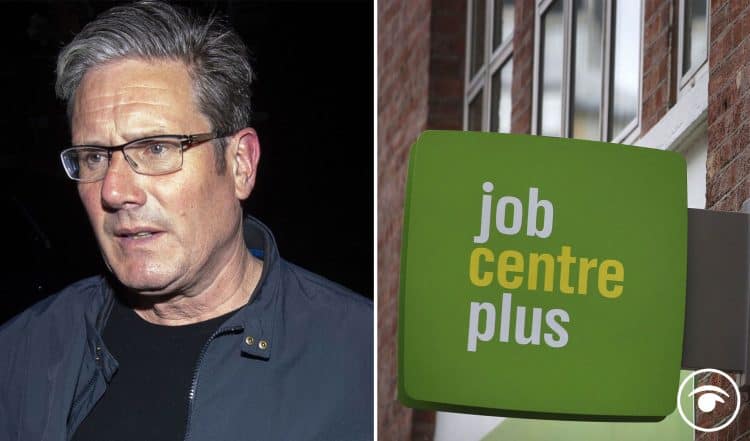 Labour has defended asking its own staff to apply for voluntary redundancy as Angela Rayner launched an employment rights charter described as a “fork in the road”.

It comes as the right of the party have taken control of key leadership positions in the capital after ousting a number of Corbynista members.

Campaigners declared the party is “on the mend” as largely centre-left candidates won 13 out of 16 posts that represent Constituency Labour Parties [CLPs] on the London regional board.

The party’s deputy leader visited the Impact Hub co-working space in central London on Monday to unveil a “new deal for working people” which promises to “fundamentally change” the economy as the party seeks to win back traditional voters who have switched to the Conservatives.

She said Labour’s plan for workers is “the minimum” they could expect after working through the pandemic.

But she was forced to admit that the party is asking its own staff to consider taking voluntary redundancy due to a lack of funds.

The Labour List website reported last week that party reserves are down to one month’s worth of payroll, and said general secretary David Evans had told the National Executive Committee: “We don’t have any money.”

Asked about the situation, Ms Rayner said: “We are in the devastating circumstances where we have lost general elections and we have lost resources as a result of that, and our organisation has to change.

“At the moment we are asking people to take voluntary redundancy and change the way we do our work like any organisation that goes through those times.”

She said Labour will “never support or endorse or take fire and rehire as an acceptable process” and added: “It is very worrying for our staff who are going through that process. But we want to make sure that the Labour Party is in a very lean, fit position to go forward to win the next general election.

“We have got to be honest about the change that needs to happen. We can’t go through the defeats we have gone through succession after succession and not make any changes.”

Labour leader Sir Keir Starmer was due to join Ms Rayner on the visit in a display of solidarity following a period of turbulence but has instead been forced into self-isolation.

But ahead of the launch, he pledged to make the nation “the best place to work” and said the pandemic has “exposed the fact that millions of workers don’t have the dignity and security they deserve”.

Over the summer, Labour’s front bench will set out the five principles that its new deal for work is based on: security at work, quality jobs, a fairer economy, opportunity for all, and work that pays.

It includes pledges for a “real living wage” of at least £10 an hour, a “fair and level playing field” on tax between multinationals and local businesses, and to improve workers’ rights while strengthening trade unions.

Speaking to workers during her visit on Monday, Ms Rayner said: “Today the new deal is about… we are at a fork in the road as we come out of this pandemic… is that people in Britain shouldn’t have to go to work and really struggle to feed their families and support themselves in very low-paid, insecure work.

“I think that will really boost our economy but also give people some security and respect in work. We think that is the absolute minimum that people should expect.”

She added that the day one employment rights could include getting rid of probationary periods, saying there are “other ways” in which employers can deal with staff who are not “up to the job”.

Related: Lying: Bercow demands ‘absurd’ rules are changed so MPs can call out other members