The deal would see Labour step back from the top 30 Lib Dem target seats at the next election. 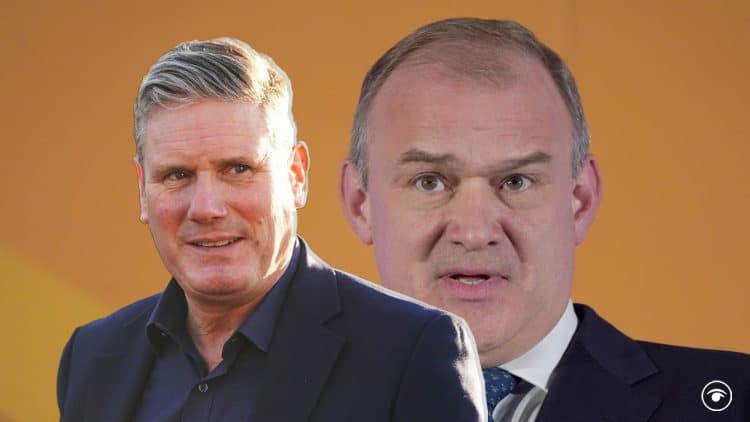 Labour will fight a threadbare campaign in most of the Liberal Democrats’ top 30 target seats at the next general election as part of an informal plan to topple the Tories.

According to the Financial Times, Sir Keir Starmer has told Labour colleagues that the party must “ruthlessly focus” resources on its target seats, leaving the Lib Dems as the main challengers in many areas.

Starmer’s allies told the newspaper that none of Labour’s top target seats feature on the Lib Dems’ list of 30 target seats. “If both parties put resources into where they are most likely to win, you end up with more Labour seats and more Lib Dem seats,” one said.

Sir Keir remains focussed on winning an outright majority at the next election, which must be held before 2024, but that would require Labour to win over 125 seats after it suffered its worst election result since 1935 two years ago.

And Tory strategists are said to be concerned by the Lib Dem threat in their southern, rural heartlands – the so-called “blue wall” – following shock wins by Sir Ed Davey’s party in the Chesham and Amersham and North Shropshire by-elections last year.

The informal pact, if realised, would leave the Lib Dems as the main challenger to the Tories in many southern seats, with Labour increasingly focussed on regaining the “red wall” seats it shed in the north and midlands.

“If Labour and the Liberal Democrats spend all their time and money trying to beat each other it’s really not good for progressive politics,” one Lib Dem strategist told the FT. “We need to fight in the areas where we can win and that is the overwhelming priority.”

Of the top 30 Lib Dem target seats, 26 are Tory-held, with 22 of them in the south. Labour will reportedly only fight the party in the university constituencies of Cambridge and Sheffield Hallam, both Labour-held seats.

If Davey were to win 15 of their target Conservative seats, it would reduce the current 77-seat Tory majority by 30 – significantly easing Starmer’s road to power.

Labour and Lib Dem shadow ministers are reportedly getting to know each other informally in the event that the parties are forced to work together in a hung parliament.

“We can’t be in a position like we were in 2010 when we barely knew each other,” one Labour shadow cabinet member said.

Covid ‘not going away’

Meanwhile Starmer has said ending free coronavirus testing “is a mistake” which would increase the risk of Covid transmission.

The Labour leader was commenting after reports first emerged on Tuesday that free lateral flow (LFT) and PCR tests are set to be scrapped next week.

The change would mean everyone – including vulnerable people, children and health and care workers – would have to pay to access tests for the virus, in plans first reported by LBC.

On a visit to Birmingham’s Erdington constituency on Wednesday, ahead of a by-election there next month, Sir Keir said: “I think ending free testing is a mistake.

“Covid isn’t going away. Obviously all of us want restrictions to be release, but it’s still important that people test if they’ve got symptoms or if they’re going to see somebody who is particularly vulnerable.

“And if you take away free tests then that will diminish the likelihood of that and make it worse in the long run.”

Related: Prince Andrew agrees not to say he did not rape Virginia Giuffre