The Attorney General has thrown her hat into the ring to be the next Conservative Party leader, prompting people to share reminders of this excruciating interview. 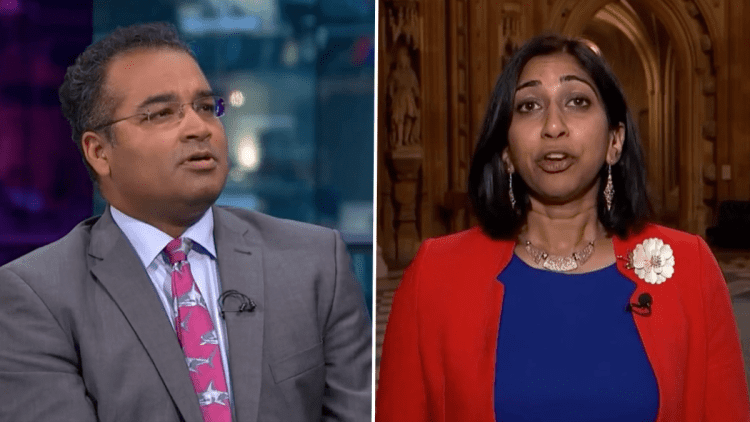 Tory leadership candidate Suella Braverman was not given an easy ride when she spoke to Channel 4 News’ Krishnan Guru-Murthy back in 2017.

The Attorney General, who this week set out her vision as prime minister at a meeting of the reconstituted Conservative Way Forward, a Thatcherite thank tank, was put to task by Guru-Murthy over the publically-funded European Research Group (ERG).

Describing the “express mission” of the pressure group of pro-Brexit Tory MPs as being to “support the government to deliver a Brexit which is reflective of the result of the referendum, which is prosperity-led and successful”, she was forced to confess:

“It is funded by public money, and it has been for many years, yeah,” teeing Guru-Murthy up for his offensive.

The broadcaster asked: “How many government ministers are in it?”

Then came the hesitation from Ms Braverman: “I’m not going to say how many government ministers are in it, because it is- it is essentially a group of, erm, members of parliament.”

“It’s a secret society, is it,” asked the news presenter.

When this was denied by the attorney general, he continued asking just how many ministers are in the group, only for her to go back to her description of what the ERG was.

Mr Guru-Murthy went on to say: “Sorry, you just said you take public money, therefore the public ought to know where its money is going. Who are the members?”

Ms Braverman replied: “It’s all on the public record and people are able to, er, disclose their name … I’ve told you, I’m not going to change, that the members of the European Research Group are a group of MPs who support the government’s agenda in delivering a successful…”

At one point, she had to pause to compose herself after being asked once again about a list of members.

“This is not something for- but I can definitely provide that. It’s a list of MPs who make clear their declarations of contributions to the European Research Group. It funds a researcher who is providing research on a parliamentary basis for matters to do with the European Union,” Ms Braverman waffled.

Watch the painful clip in full below: