The online presence of political parties and candidates has never played a bigger part in the quest for power. From Donald Trump to Jeremy Corbyn, the digital world has helped turn outsiders into leaders. Political party websites are a tool used to attract, engage with and mobilise support, and the recent General Election in the […] 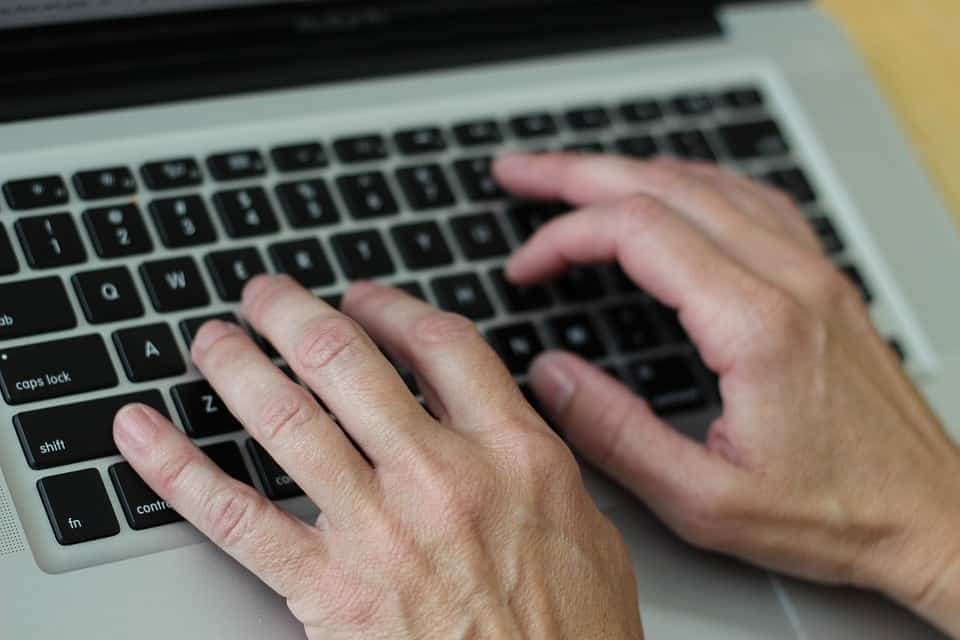 The online presence of political parties and candidates has never played a bigger part in the quest for power. From Donald Trump to Jeremy Corbyn, the digital world has helped turn outsiders into leaders.

Political party websites are a tool used to attract, engage with and mobilise support, and the recent General Election in the UK was no exception.

The growing importance of political websites

In a study titled The role of a political party website: Lessons learnt from the user perspective, Følstad et al claimed that websites had become “important arenas for political communication”, and that through them “political parties can present their message directly to citizens.”

In a relatively short space of time, internet use has increased exponentially. As such, political parties have to make their websites as engaging as possible, and it seems that in the 2017 general election, some did this more successfully than others.

Domain extensions, like .com, are categories of internet domain names.  They give clues about the website in question, such as location(.co.uk) or the type of industry the business works in (.space). There are even domain names that spell out exactly what a company does (.cafe or .beer).

There are domain extensions that can be exclusive to political parties such as .vote or .party, and others for non-business organisations, such as .org. Intriguingly, the best option for political websites may well be .com. Online branding experts Novanym describe .com as the golden domain. In a blog on the subject, Novanym argue that .com gives a brand authority, with .com being the global extension, one that surpasses specificity.

The two major parties in the UK differ in their approach to domain extensions, with The Conservatives choosing .com and Labour using .co.uk. In fact, the Tories are the only major political party in the UK with a .com domain extension, and they also attempted to present themselves as the authoritative voice in British politics during their campaign. 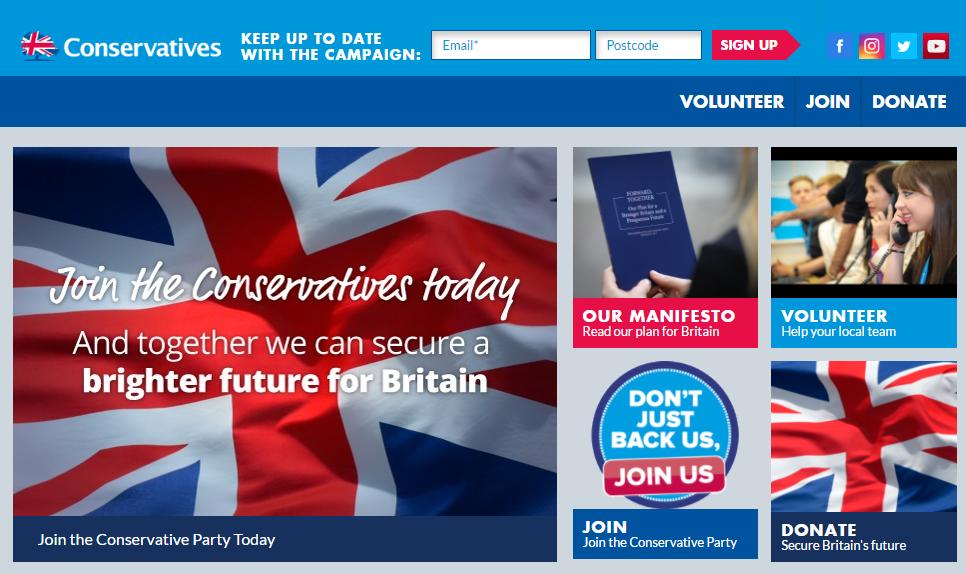 Følstad et al stressed the “importance of high-quality informational content in political party websites.” Party websites should contain facts, and not, as has become popular, alternative facts. Most party websites contain a news section, the manifesto and background information on the party. Websites also need to be as interactive as possible and content plays a big part in this by including donate sections and linking to social media pages.

According to a study by New Media Campaigns, the most important content section of a political website tends to be the ‘About Us’ section. In an article on preparing content for your campaign website, Online Candidate suggest that every website should contain news, an ‘About Us’ section, some focus on their key values, endorsements, and voter registration information.

The way content is portrayed on the two main party websites do not differ significantly. Both have links to current events, as well as their manifesto and an About Us section.

The importance of images for campaign websites can’t be understated. Online Candidate suggest that typically the homepage should contain one head shot or image of the candidate, a flag of the nation or landmarks that symbolise that nation and images from events and party gatherings.

There was a large image of Theresa May at a campaigning event with the now painfully familiar tagline ‘Strong and Stable’. In fact, the words strong, stronger and strengthen appeared all over the homepage. There was also a heavy presence of Union Jacks, not least on their own logo – an Oak Tree decorated in red, white and blue.

The images on Labour’s site differed significantly from the images on the Conservative website. They avoided most of these political party cliches but did have images of their logo and campaign events. 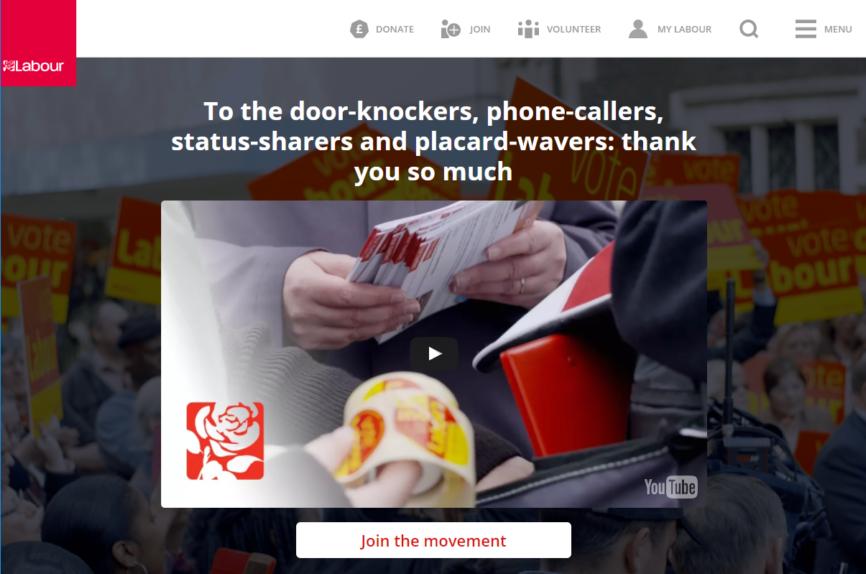 Website translation is often used by businesses who want to expand into new markets abroad. However, for political candidates, there may be audiences in their own country that can vote but may not speak English.

This is certainly something Hillary Clinton’s campaign team thought about during the 2016 Presidential election. There are over 40 million native Spanish speakers in the US who Clinton sought to court after certain infamous comments by Donald Trump. This is a huge market to engage with, so hillaryclinton.com had a Spanish website translation shortcut located in a prominent position. Unsurprisingly, Hillary Clinton won 66% of the Latino vote.

None of the political party websites are available in multiple languages in the way hillaryclinton.com. Even the SNP, whose website is not available in Gaelic, despite the fact that they claim that they “remain committed to increasing the use and visibility of the language (Gaelic)  to ensure its sustainable long-term future.”

A Call to Action is a statement that provides an impetus to do something e.g Join Today, or Donate. Jeremy Corbyn’s rise from rebellious backbencher to the leader of the Labour party in 2015 was helped by his website including a Call to Action.

In terms of finances Corbyn’s campaign was threadbare, but he had the advantage in the digital space. An article published in the Guardian explains that they key to Corbyn’s success “was the prescient decision to embed the £3 registration process directly into the campaign’s website – ensuring that thousands of people who visited the website were easily able to sign up.”

This is a very simple application to a website, but it is something the other candidates didn’t do. Almost 200,000 new members joined the Labour party during the campaign, and Jeremy Corbyn won in a landslide.

When it comes to creating an interactive website, Labour were the unquestionable winners.

There were shortcuts to Labour’s various social media handles as well as a link to a newsletter, a running stream of the social media posts, and an interactive map of Labour campaigning in your local area. This was a deliberate tactic by the agency who designed the Labour website, Blue State Digital, who claim the “action-oriented responsive website experience serves as an engine to build and mobilise a rapidly-growing community of advocates.” Something that experts now agree the party was very successful at doing.

What other online factors impacted the election?

Political websites are just one part of a wider trend in the digitalisation of politics. Campaigning is no longer just done on the street, but online too. The success of Corbynism, and on the other hand, the utter failure of the Conservatives to engage with younger voters, is testament to this.

The Corbyn-supporting Momentum, a 24,000 member strong campaign group hugely helped motivate people online to both vote and encourage others to vote. Momentum launched mynearestmarginal.com, an app which informed would-be campaigners where the nearest marginal seat to their postcode was. Momentum state that this technology had never been previously used in an election.

Digital strategy experts claim that Labour won the ‘social media election’. In contrast to Labour’s ‘very polished’ campaign, the Tories’ digital presence was seen as ‘unprepared and unresponsive’. By focussing on engagement, Labour managed to motivate voters rather than run smear campaigns. This way of using the online world helped Labour do much better than expected.

If most of the print media supported the narrative of the Conservative party, the online space was dictated by Labour, a point proved by the fact that the Conservatives’ social media video encouraging people to vote has less than half the views of Labour’s. The power of the digital world is starting to finally be utilised by mainstream politics, and the parties that risk getting left behind online, risk losing future elections.