"The day after it’s revealed he said he’d let ‘bodies pile high’, he makes a late evening visit under cover of darkness, just so that he can dodge meeting bereaved families." 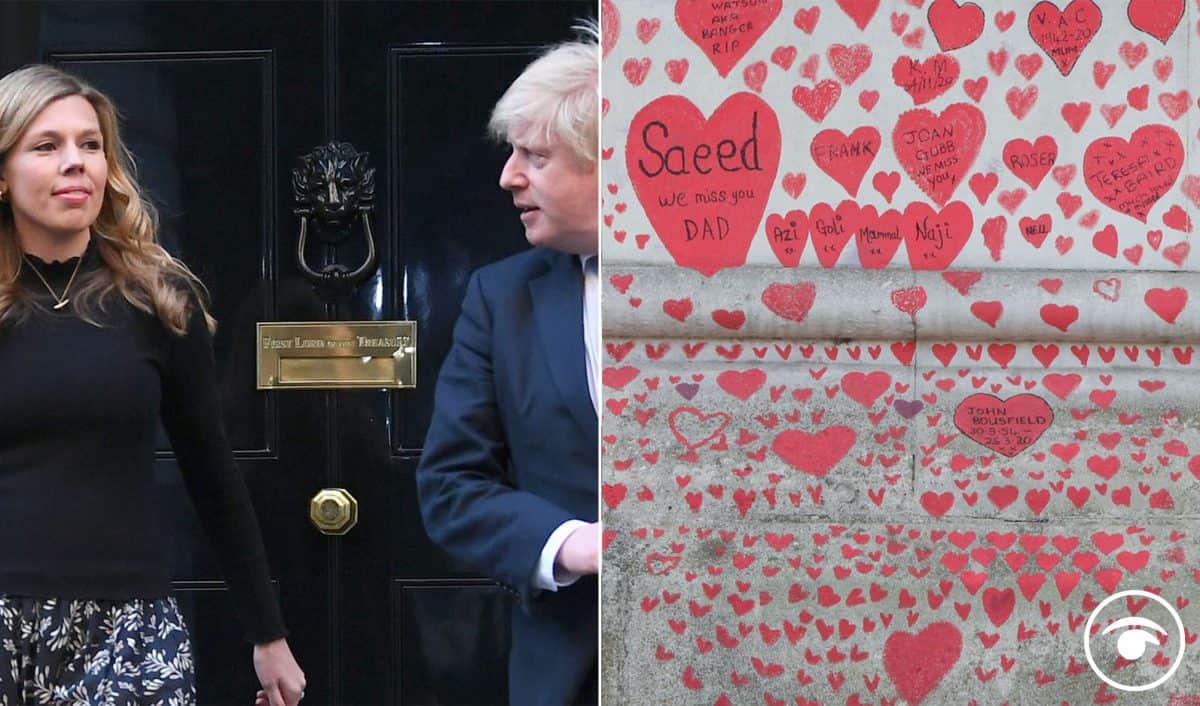 Department store John Lewis appeared to mock Boris Johnson as he faced a probe into the controversial refurbishment of his Downing Street flat. It comes as it was revealed that the PM visited the Covid memorial wall ‘under the cover of darkness.’

The lavish update of the Downing Street decor was reportedly inspired by a desire to get rid of the “John Lewis furniture nightmare” left over by Theresa May.

As the Electoral Commission launched an investigation into how the new look was funded, John Lewis suggested it had something for “almost” everyone.

The description of the flat – attributed to a visitor – was included in a Tatler article on Mr Johnson’s fiancee Carrie Symonds.

Time for an interiors refresh? ?✨We pride our Home Design Service on having something for *almost* everyone ? https://t.co/hbWsjU4sm1

On Twitter, John Lewis said: “Time for an interiors refresh?  We pride our Home Design Service on having something for almost everyone.”

Good thing we have a recycling service for old pre-loved furniture ??? pic.twitter.com/uVB9krdDJH

Phew, the John Lewis social team have just finished an all day brainstorming session to find ways for people to talk about us on Twitter….. Have we missed anything? ?

Labour leader Sir Keir Starmer’s spokesman said “unlike the Prime Minister he doesn’t turn his nose up to John Lewis thinking it’s too downmarket” and “wouldn’t spend £840 per roll on wallpaper”.

The Electoral Commission said there were “reasonable grounds to suspect that an offence or offences may have occurred” during the financing of the revamp of the Prime Minister’s flat above No 11.

The taxpayer funds a £30,000 annual allowance, but the redecoration – reportedly involving the company Soane, co-founded by designer Lulu Lytle – have stretched beyond that.

Some reports suggest the upgrades hit the £200,000 mark, while a leaked email suggested Tory peer Lord Brownlow was making a £58,000 donation to the Conservatives “to cover the payments the party has already made on behalf of the soon-to-be-formed ‘Downing Street Trust’”.

Downing Street has said Boris Johnson went to the National Covid Memorial Wall for “quiet reflection” after campaigners for bereaved families criticised the “visit under cover of darkness”.

Covid-19 Bereaved Families for Justice accused the Prime Minister of trying to dodge relatives of those who have died during the crisis by visiting the memorial late on Tuesday.

But No 10 defended Mr Johnson’s “private” visit to the site opposite the Houses of Parliament as being for “quiet reflection”, and said he “offers his deepest condolences” to those who have lost a loved one.

His official spokesman told reporters the Prime Minister, before this week’s memorial visit, had met with “a number” of families mourning loved ones who had died after contracting the virus.

The Covid campaign group is considering legal action against the Government as it demands ministers set a date for an independent, judge-led inquiry into the crisis.

Sincerity would have been giving the respect to families that invited him to the memorial in writing back to their invite.

Sincerity would have been meeting those who created the memorial.

Sincerity would have been to #WalkTheWall with those who had lost loved ones. https://t.co/YLN3jMPNgM

Co-founder Matt Fowler said: “For weeks we’ve asked him to come to the wall and meet bereaved families. He’s refused to even acknowledge our request.

“Then, the day after it’s revealed he said he’d let ‘bodies pile high’, he makes a late evening visit under cover of darkness, just so that he can dodge meeting bereaved families.

“This is a cynical and insincere move that is deeply hurtful. Our invitation for him to walk the wall with families who’ve lost loved ones is still open, and we await a response.”

Mr Johnson has denied saying he would rather let “bodies pile high” than impose a third coronavirus lockdown.

The Prime Minister’s official spokesman denied that Mr Johnson chose the late hour of his visit to avoid having to meet members of the virus bereavement group.

The Downing Street spokesman said: “No, he went on Tuesday evening for a private visit.

“As many others have done, he visited the memorial wall in private for quiet reflection.

“The Prime Minister has spoken to a number of families bereaved by Covid, both in person and virtually.

“With regard to the Bereaved Families for Justice group, the Prime Minister has said he is happy to meet them at an appropriate time to do so and once the legal proceedings have concluded.”

Separately, a No 10 spokeswoman said: “The Prime Minister offers his deepest condolences to everyone who has lost a loved one during this very difficult pandemic.”