The Lib Dem leader said negotiations are taking place in relation to a ‘small number’ of constituencies. 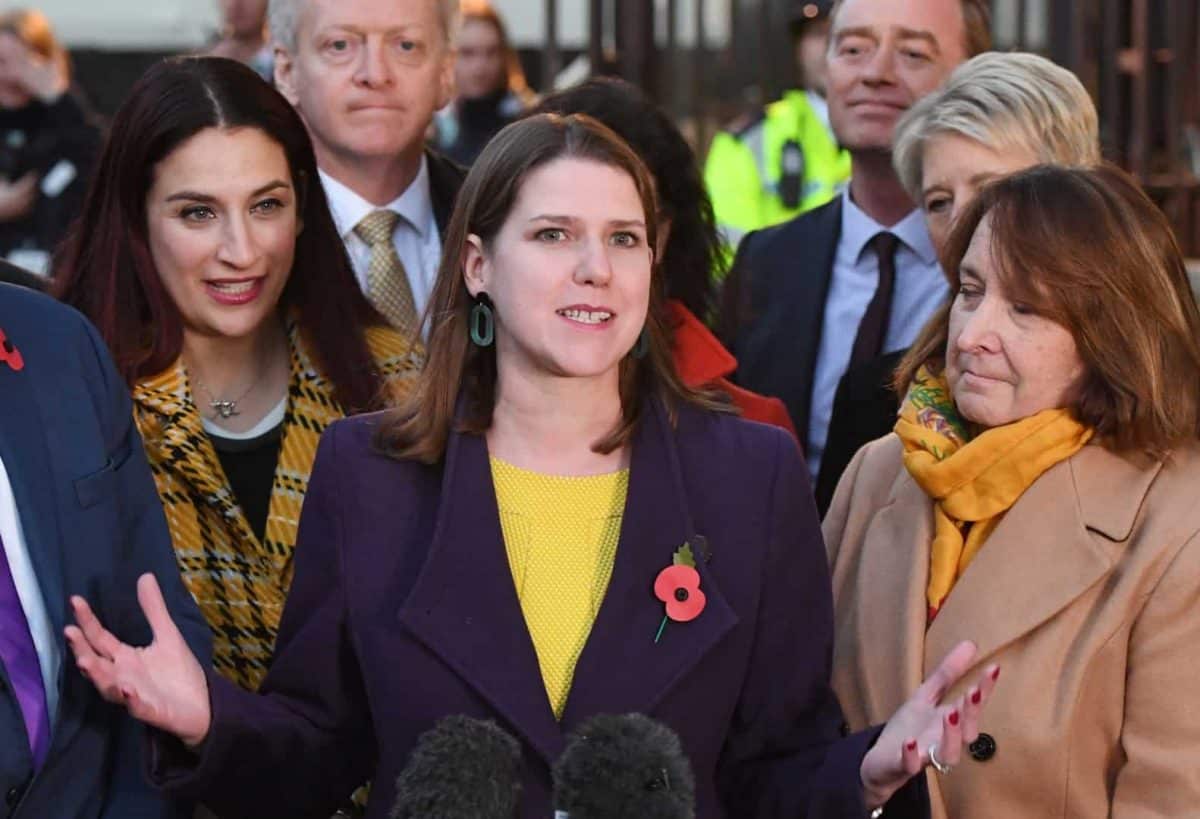 Jo Swinson has suggested the Liberal Democrats could reach “arrangements” with other pro-Remain parties to ensure one candidate has a clear run.

The Lib Dem leader said negotiations were taking place in relation to a “small number” of constituencies in the forthcoming general election.

Speaking outside the Houses of Parliament she highlighted their success in the recent Brecon and Radnorshire by-election, which was won by the Lib Dems’ Jane Dodds after the Greens and Plaid Cymru did not field candidates.

“We are obviously – as has been discussed – in negotiations … so there may well be a small number of seats where there are arrangements that are agreed, such as what happened in Brecon and Radnorshire,” she said.

“So we will of course work with other parties that also want to stop Brexit. We have been doing that successfully in the House of Commons.”

The move comes as reports emerge that the Brexit party is considering pulling out of hundreds of seats in what would be a game-changer for Boris Johnson’s hopes of winning the December election. The party is expected to announce its strategy on Friday.

Ms Swinson said that in most constituencies the Lib Dems were the strongest pro-Remain party.

“The Liberal Democrats are fighting our most ambitious general election yet,” she said.

“If people want to stop Brexit, if they want to Remain, they need to vote Liberal Democrat.”

Ms Swinson again dismissed suggestions the Lib Dems could prop up either Labour or the Conservatives in the event of a hung parliament.

“Both Boris Johnson and Jeremy Corbyn are not fit to be prime minister,” she said.

“Both those parties sit at the extreme ends of their political spectrums.”

Boris Johnson and Jeremy Corbyn are hitting the General Election campaign trail as they trade blows in the run-up to the pre-Christmas poll.

The Prime Minister blamed his failure to live up to his “do or die” promise to deliver Brexit on Halloween on the the Labour leader, while Mr Corbyn hit out at the “corrupt” British system of doing business.

As the UK braced itself for a bitter winter election campaign ahead of the December 12 poll, Culture Secretary Nicky Morgan cited the “abuse” she had received as she became the latest high profile figure to stand down at the election.

After previously pledging that he would rather be “dead in a ditch” than extend Brexit beyond October 31, Mr Johnson will use election visits on Thursday to claim it wasn’t his fault the UK’s withdrawal from the EU had been put back until January 31.

As the General Election campaign cranked into gear, the PM is due to say: “Today should have been the day that Brexit was delivered and we finally left the EU.

“But, despite the great new deal I agreed with the EU, Jeremy Corbyn refused to allow that to happen – insisting upon more dither, more delay and more uncertainty for families and business.”

In his first major stump speech of the countdown to the pre-Christmas political clash, Mr Corbyn will hit out at the “tax dodgers, bad bosses, big polluters, and billionaire-owned media holding our country back”.

Mr Corbyn will use the speech in London to “call out” people like the media baron Rupert Murdoch, and the Duke of Westminster.

Mr Corbyn will say: “This election is a once-in-a-generation chance to transform our country, take on the vested interests holding people back and ensure that no community is left behind.

“Whose side are you on? The dodgy landlords, like the Duke of Westminster, Britain’s youngest billionaire, who tried to evict whole blocks of families to make way for luxury apartments? Or the millions of tenants in Britain who struggle to pay their rent each month?

“Whose side are you on? The bad bosses like Mike Ashley, the billionaire who won’t pay his staff properly and is running Newcastle United into the ground?

“Whose side are you on? The big polluters like Jim Ratcliffe, Britain’s richest man who makes his money by polluting the environment? Or the children growing up in our cities with reduced lung capacity because of choking pollution?

“And whose side are you on? The billionaire media barons like Rupert Murdoch, whose empire pumps out propaganda to support a rigged system.”

Announcing her decision not to run in the election, Ms Morgan cited the abuse she had received as an MP.

She said: “But the clear impact on my family and the other sacrifices involved in, and the abuse for, doing the job of a modern MP can only be justified if, ultimately, Parliament does what it is supposed to do – represent those we serve in all areas of policy, respect votes cast by the electorate and make decisions in the overall national interest.”

Meanwhile, Brexit Party sources told the PA news agency that reports the organisation, headed by Nigel Farage, would stand down candidates in Tory seats and concentrate on challenging some 20 Labour MPs in Leave areas was “wild speculation”.