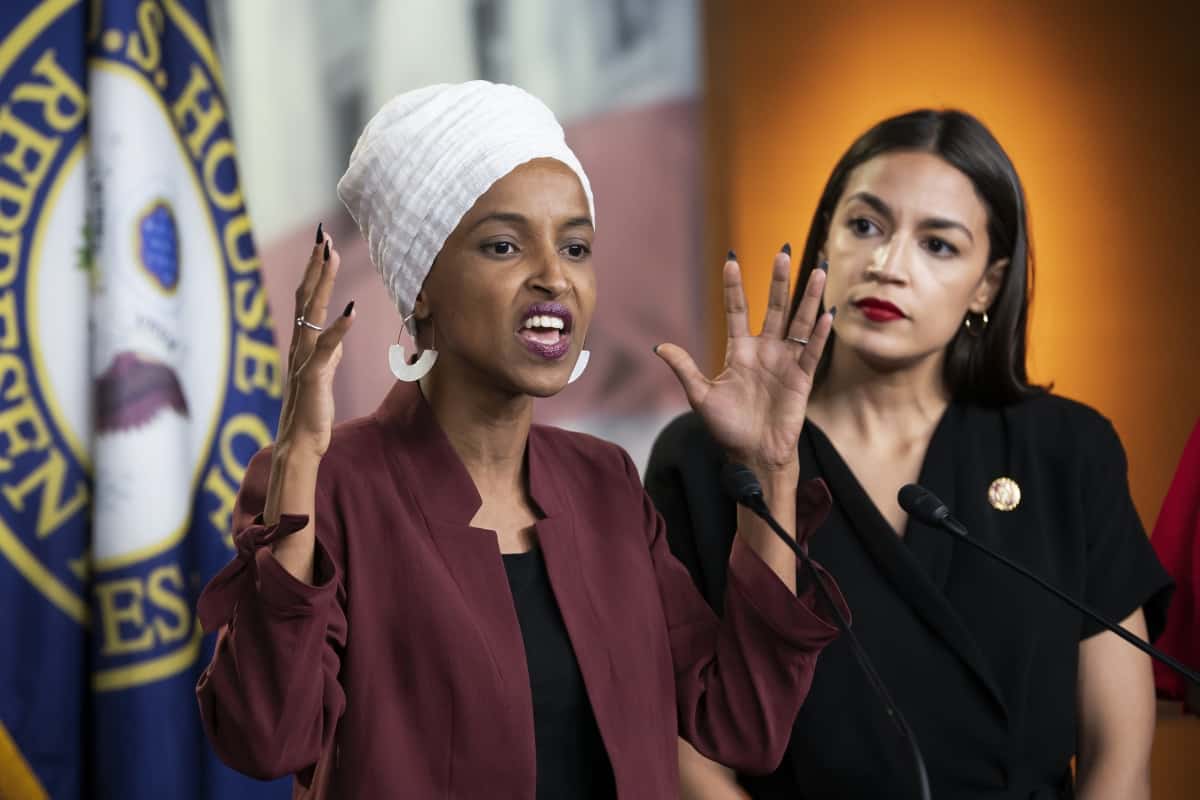 U.S. Rep. Ilhan Omar, D-Minn., left, joined at right by U.S. Rep. Alexandria Ocasio-Cortez, D-N.Y., responds to base remarks by President Donald Trump after he called for four Democratic congresswomen of color to go back to their "broken" countries, as he exploited the nation's glaring racial divisions once again for political gain, during a news conference at the Capitol in Washington, Monday, July 15, 2019. All four congresswomen are American citizens and three of the four were born in the U.S. Omar is the first Somali-American in Congress. (AP Photo/J. Scott Applewhite)

Congresswoman Ilhan Omar has received support from across the world after Donald Trump supporters chanted “send her back” at a rally for the US president.

The chants at a rally in North Carolina came as Mr Trump doubled down on a series of widely criticised tweets in which he said four Democratic congresswomen could “go back and help fix the totally broken and crime infested places from which they came”.

At the rally, he rounded on the four by name, criticising Alexandria Ocasio-Cortez, Ms Omar, Ayanna Pressley and Rashida Tlaib.

When Mr Trump spoke about Ms Omar – who was born in Somalia and moved to the US as a refugee when she was a child – the crowd responded with chants of “send her back”.

She responded by quoting Maya Angelou poem Still I Rise, and later tweeting: “I am where I belong, at the people’s house and you’re just gonna have to deal!”

Among the many Democrats stating their support for Ms Omar were a number of contenders for the presidency.

Kamala Harris said the spectacle “defiles the office of the President”, while Elizabeth Warren said that “calling out his racism, xenophobia, and misogyny is imperative”.

Jon Favreau, a former member of Barack Obama’s staff, described the spectacle as “one of the most chilling and horrifying things I’ve ever seen in politics”.

In the UK, London mayor Sadiq Khan – himself a frequent target for Mr Trump’s invective – said the four congresswomen targeted by Mr Trump “represent hope for the future”.

Labour MP Tulip Siddiq said the “racist rally sends shivers down my spine”, and her party colleague Jess Phillips said: “This is what fascism looks like. We must fight it at home and abroad.”

Ed Davey, a contender in the Liberal Democrat leadership contest, wrote: “This is heartbreaking and terrifying. If we don’t learn from history we are doomed to repeat it.

“All of us who stand for liberal values, and for decency, must stand up to Trump’s disgusting racism and the hate he sows.”

Mr Trump has repeatedly defended his comments about the congresswomen, tweeting recently: “I don’t have a Racist bone in my body!”

However, the Democratic-led US House of Representatives disagreed, voting earlier this week to brand the words as “racist comments”.