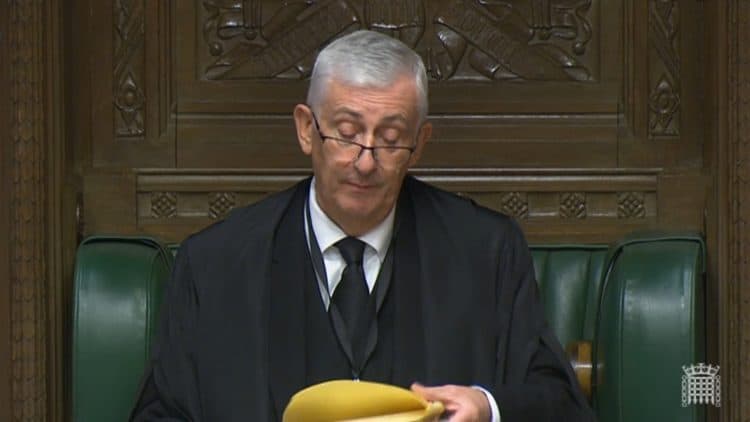 Sir Lindsay Hoyle has urged the Government Chief Whip to crack down on the level of shouting and barracking from Conservative MPs during Prime Minister’s Questions.

The Commons Speaker said a “disproportionate” amount of the heckling came from the Government benches during this week’s session.

He advised Chris Heaton-Harris to deal with “some of his crowd” which gather near the Speaker’s chair.

She insisted her question would have been delivered quicker without the barracking after Sir Lindsay encouraged her to reach a conclusion.

In a statement to the Commons on Thursday, Sir Lindsay told MPs to keep their questions “focused and brief” during PMQs so as many of them can raise matters with Mr Johnson.

He insisted there is “nothing personal” about his approach in cutting off questions.

Sir Lindsay also said: “I want to deal with a related issued, it’s not always easy to ask short, snappy questions when other members are shouting and barracking.

“There was far too much of it yesterday and a disproportionate amount of it coming from the Government benches, and in particular to the side of the chair which makes it very hard to hear what’s being said.

“So I hope the Government bench will take this on board, in particular the Chief Whip who will deal with some of his crowd at the side of the chair of me.”

Sir Lindsay said those involved in the “excessive noise and barracking” of colleagues will be “asked to leave the chamber” if it continues.

He added: “We want PMQs to be the showcase for this House and for our democracy so I say to all MPs, please respect the rules of the House about how we refer to each other and make questions and answers concise, and behave with dignity in a way that allows questions and answers to be heard.”

The Speaker ruled PMQs was “not the appropriate place” for Mr Hussain to address the allegations.

Mr Spencer was moved from chief whip to his new post in Mr Johnson’s minor reshuffle, but his continued role in Government raised eyebrows as he continues to be investigated over his role in Tory MP Nusrat Ghani’s allegations of Islamophobia.

The Prime Minister commissioned an investigation to “establish the facts” regarding Ms Ghani’s claim that she was told by a whip her dismissal as a minister in 2020 was partly because of concerns about her “Muslimness”.

Mr Spencer identified himself as the whip but denied her accusation.

Sir Lindsay said the rules of the House mean such criticisms of an MP “may not be made as sideswipes” during questions or debates, but should only be done in the form of a substantive motion.

He added: “That is to avoid our question time and debates descending into partisan accusations and counter-accusations.

“I know (Mr Hussain) understands the issue and I know he has apologised to (Mr Spencer).”