The Labour peer who fled the Nazis, aged six talked to The London Economic about what we can do now that Conservative MPs appear to have abandoned previous promises in the EU Withdrawal Act to reunite unaccompanied child refugees with their families. 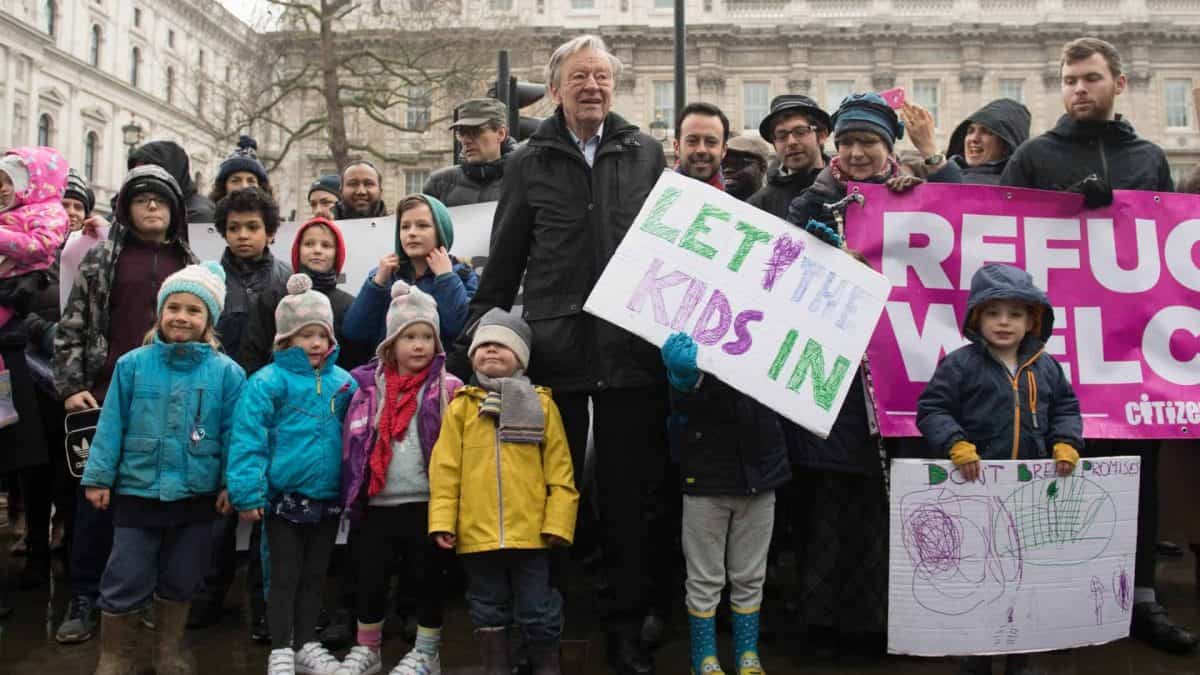 The London Economic has copped some flack from Conservative MPs such as Mansfield MP Ben Bradley who responded with colourful language to our reports of how every Conservative MP voted to remove guarantees the previous Tory Government had given to agree a safe path to reunite lone refugee children with their families.

Boris Johnson agreed to keep Lord Dubs’ amendment in his Withdrawal Bill, passed by MPs before the election. Then straight after the election he dropped the commitment. Despite lobbying by Lord Alf Dubs, members of the public and the House of Lords voting with their conscience to reinstate the humane provision, every Conservative MP voted with the Government whip twice to remove Lord Dubs’ amendment and replace it with a statement by the Government on the matter over the next two months.

The 87-year-old who has dedicated much of his life to helping refugee children told The London Economic that the children had been “betrayed” by the Government.

“There was a clear understanding that there would be a path to safety which the government would negotiate with the EU,” explains Lord Alf Dubs.

“Now I think they’ve been let down and betrayed. Once there is a signal from the Government that they don’t support this anymore, people feel there is no alternative but to go with a traffickers and cross illegally: very dangerous and very disappointing.”

Alf Dubs who has visited Northern France and Greece several times recently to monitor conditions for refugees worries that hundreds of unaccompanied children who would have had a safe passage to the UK to join their families now face a desperate situation.

He said conditions for them are “appalling and worsening.”

The Labour peer described what he witnessed: “In Calais some of them are sleeping rough under tarpaulins with no protection for them.

“In Greece, on Lesbos they’re crowded into a refugee camp where there’s about five times as many people as there should be. Those who can’t sleep in the camp are sleeping under tarpaulins, under the trees nearby. I’m told there’s no security in the camps – the kids are in danger. Even boys get raped at night. “It’s a terrible situation and there’s a complete lack of hope. They are stuck there.

“The conditions are absolutely appalling and these are young people who have fled war, they have fled their families being killed, they’ve fled persecution, they’ve come long journeys from Syria or from Afghanistan or from the Horn of Africa.

“They’ve had desperate journeys and now their way is being blocked at the last stage.”

Lord Alf Dubs arrived in Britain aged six placed on a train from Prague by his Jewish mother who was later able to escape to Britain too to join Alf and his father who was already in the UK.

The train was part of the Kindertransport organized by Sir Nicholas Winton, who helped 669 mainly Jewish children flee Czechoslovakia just before the outbreak of the Second World War, an act of humanity remembered this week as the world commemorated Holocaust Memorial Day 75 years after the liberation of Auschwitz Concentration Camp.

On the eve of World War II, the UK took in around thousands of predominantly Jewish children from Germany, Austria, Czechoslovakia and Poland. Many went to British foster homes, hostels, schools and farms. Some were the only members of their families who survived the Holocaust.

Lord Dubs told The London Economic he believes Britain is fundamentally as decent as it was back in 1939.

“I think immigration and refugees have become much more of a political football than they used to be,” he cautions.

Many years after his rescue as a young child, Alf Dubs was able to thank Sir Nicholas Winton, who died in 2015, aged 106.

“I subsequently discovered the part he personally played and how he saved my life as well as that of a lot of other kindertransport people,” recalls Lord Dubs, who became good friends with his rescuer.

Lord Dubs became a lifelong refugee advocate. As well as the two important amendments he secured for unaccompanied child refugees, he chaired the Refugee Council for seven years and worked on immigration while on the Labour shadow cabinet front benches during the late 1970s and early 1980s.

He said he could not help being “emotionally involved in the rights of other children seeking some form of safety and to rebuild their lives.”

Asked if he felt let down that every single Conservative MP in Boris Johnson’s reinvigorated Tory majority voted to ditch his amendment in the EU Withdrawal Bill, Lord Dubs is stoic.

“It’s a new parliament,” he insists. “I think people are reluctant when there’s such heavy pressure from the Whips to rebel quite so soon in their time in House of Commons.”

He says there was “a pretty hard line taken by Number 10 to ensure that the Whip was complied with but I don’t know if that will hold in the future.

“Discipline works for a bit and then people decide that they have their own consciences too.”

Alf Dubs urges people in the meantime to “contact their MPs and get them to commit to supporting family reunion for child refugees when the issue comes up in the next few months.”

( This is a link where people can contact their MP: mysociety.org/wehelpyou/contact-your-mp )

He insists that “on the whole British public opinion is supportive of child refugees.”

Labour branded the move “disgraceful”, while the SNP said it could have “tragic consequences.”

Lord Dubs is not convinced: “If you delete something from an act that protects child refugees, you can’t say your policy hasn’t changed.

“Why delete something from an act of parliament that passed through both houses and say your policy hasn’t changed?

“Maybe the government are not mean and nasty but they are certainly giving the impression of being mean and nasty. It’s no good saying your policy hasn’t changed. We need to know something tangible is going to happen.

“If the government says they still support child refugees the big question is not whether they support them” warns the Labour peer – “everyone does that in theoretical terms – but what are they going to do about it?

“Clause 37 just states that the Government will make a statement on progress.

“We felt that was a very poor substitute for having something properly in legislation.

“A lot of Conservatives said to me – even ministers said to me – they could not understand why the Government were doing what they had just done and they supported me in my wish to see family reunions,” reveals the Labour peer, who says he has had support from across the country and across the political spectrum – in private.

“In the country as a whole there has been quite a lot of support that Britain should support family reunion for child refugees,” he insists.

“We shall be watching the Government very closely to see what they do,” promises the veteran champion of child refugees, urging people to keep up the pressure on their MPs and on the Government.