Even Sir Lindsay Hoyle lashed out at the group, accusing activists of "interfering with democracy". 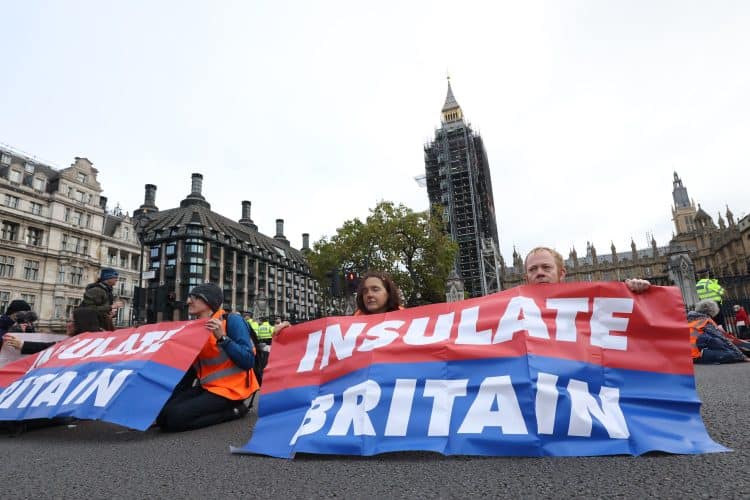 Insulate Britain protesters have been accused of “interfering with democracy” after blocking roads outside Parliament, as it emerged almost 500 injunctions have been served on the group’s activists.

The group said 62 members sat on the ground holding Insulate Britain banners on the south east of Parliament Square, on Bridge Street, and at the Peers’ Entrance to the Houses of Parliament.

Around 30 protesters glued themselves to the ground on Thursday as part of the group’s demonstrations on roads across the UK.

Commons Speaker Lindsay Hoyle said it was “totally unacceptable” that Insulate Britain was “interfering with democracy” after Conservative MP Darren Henry (Broxtowe) was delayed from entering Parliament to participate in transport questions.

Sir Lindsay told the Commons: “This is totally unacceptable. This is interfering with democracy.”

Transport Secretary Grant Shapps added it was “completely unacceptable” for MPs to be prevented from reaching the chamber.

He said: “So far, following my requirement that National Highways seek injunctions against these protesters, 475 injunctions have been served to protesters at their homes for contempt of court.

“Thirty-two are due to be coming to court, nine of which are coming later this month.”

He added: “When it gets to the point that protesting against climate change prevents members from this House getting here to hold ministers to account and be heard it is clearly counter-productive.

“Contempt of court can lead to unlimited fines, and prison sentences. And we will be acting where the law has a gap in it through the Police and Crime Bill to resolve the gap that has led to this.”

Adam Afriyie, Conservative MP for Windsor, told the Commons: “It’s very seldom I become furious. I’m absolutely apoplectic about missing my question this morning due to those reprobates outside who are doing their service no good whatsoever.

“I was sitting in my electric vehicle … I was coming here for the sole purpose of putting pressure on the government to reduce carbon emissions from aviation from Heathrow Airport, so it’s absolutely bizarre that they should block that question.”

A shout of “lock them up” could be heard as Afriyie raised his concerns.

‘We are going to keep going’

Paul Sheeky, a protester from London, was glued to the pavement during the protests.

He said: “We have been out on the road now for several weeks and a lot of the time the drivers say to us ‘this is not the right way to be doing this, go to Parliament, protest there’.

“We thought we would take that advice and give it a go. We know from protesting in Parliament in the past it doesn’t work, which is why we have to protest on the roads, but we thought we would come here all together as a show of unity just to say, yes we are going to keep going.

“This is fine compared to what is coming from the climate crisis, this is a walk in the park, essentially.

“The death and destruction that is on its way unless we tackle this issue is just beyond imagining. A slight discomfort now is a small price to pay for saving lives in the future.”

Diana Hekt, from Huddersfield, was glued to the pavement next to Sheeky. She said police communicating with the protesters had been “very civil and polite”.

Peter Anthony-Gord, a bus driver with Abellio London Bus, criticised the group. “I don’t think they are doing this properly. I really think there is a better way to do this,” he said.

“There are ways of insulating Britain which you can do with other sources, other people, companies, private finance etc rather than causing absolute chaos in London. This is not going to insulate one home sitting here.”

Anthony-Gord said he had been waiting in his bus at the head of the queuing traffic in Parliament Square for 34 minutes.

Rachel Speller, a bus driver’s wife, had walked to the front of the traffic to see what had happened after sitting on a bus with her husband, the driver, in the tailback along Whitehall.

She said: “It is just getting ridiculous now. Every other week there is some sort of protest and now they glue themselves to the floor.”

Earlier in the morning, the group published a statement reflecting on its campaign.

It said: “Insulate Britain has been one of the most successful campaigns in history. Our name recognition went from zero to 77 per cent of the public in three weeks, we have attracted enormous media interest and we have started thousands of conversations, in the press, on social media and in homes up and down the country.

“Importantly, we have exposed the government’s refusal to act on home insulation as cowardly and vindictive and their refusal to protect our country and our children from the climate crisis as genocidal and treasonous.”

Related: Fire and rehire: Gove’s PPS given job back after Paterson abstention