The UK’s youngest MP brought the house down at the SNP Conference with an emotive speech on Tory austerity and the damage it had wreaked. Mhairi Black started off mocking Prime Minister Theresa May by complaining she had a cough too, before insisting that Scotland is strong enough to survive as an independent entity. “Why […] 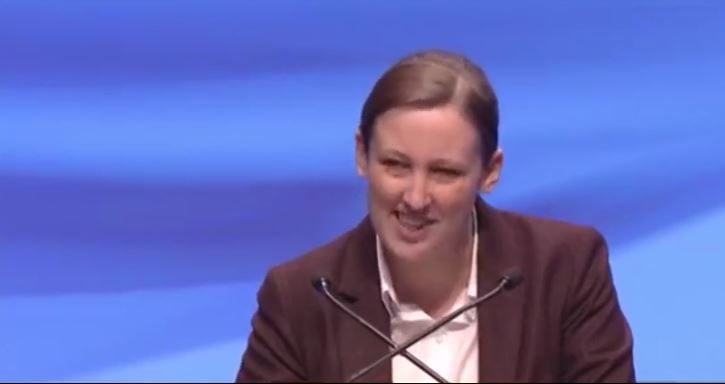 The UK’s youngest MP brought the house down at the SNP Conference with an emotive speech on Tory austerity and the damage it had wreaked.

Mhairi Black started off mocking Prime Minister Theresa May by complaining she had a cough too, before insisting that Scotland is strong enough to survive as an independent entity. “Why would Westminster genuinely want to keep us if we were a financial burden?” asked the 23 year old MP.

But she saved her greatest vitriol for a full assault on the Labour leader Jeremy Corbyn, announcing that the SNP would offer far more radical policies economically, on austerity and on the Trident nuclear deterrent.

The unprecedented full on attack on Jeremy Corbyn may indicate the threat a Labour Party surging in the polls presents, but also may be a reaction to a damning eve of Conference analysis by Scottish Labour of

a decade of SNP power in Scotland (see below).

The SNP MP insisted that Jeremy Corbyn was scaremongering about the economic consequences of Scottish Independence, particularly his analysis that it would end up leading to “turbocharged austerity“.

On reversing austerity, Mhairi Black insisted that Labour would “choose to keep 78 per cent of Tory cuts” and “still sign up to waste billions of pounds on nuclear weapons.”

“Jeremy Corbyn and I actively agree on quite a lot of things which is why I hope what I’m about to say is taken with the sincerity with which it’s intended,” the 23 year old MP for Paisley and Renfrewshire conceded, before sticking the knife in:

“I am so disappointed with Jeremy Corbyn, so disappointed. He may be an opponent but I was heartened to see Jeremy Corbyn elected as leader of the Labour party because I thought ‘finally someone normal and sensible to work with in London’. But instead we’ve got more of the same London spin and nothing more than talking a good game.

“If you’re going to call for an end to austerity, don’t release a manifesto scrapping only £2 billion out of a total £9 billion’s worth of planned Tory cuts. Don’t tell the vulnerable that you’re fighting for them while you choose to keep 78 per cent of Tory cuts.

“Don’t tell young people you’ll scrap tuition fees but turn a blind eye to Labour who hike them up in Wales. Don’t tell us you’re different and then still sign up to waste billions of pounds on nuclear weapons.”

To rapturous reactions from the Glasgow conference, she warned the Labour Leader who is currently enjoying a massive 5 per cent poll lead since the Labour Party Conference: “don’t dare spread fear and utter drivel about an independent Scotland meaning we would suffer turbo austerity because while you’re doing that, our Scottish government is saddled with paying £453.8 million mitigating and protecting people from the very worst of the Tory policies that we never voted for in the first place, and they have a cheek to say it’s our fault.

“Why can I say that? Because I’m sick to the back teeth of British nationalists perpetuating the myth that Scotland could not afford to thrive in the world as an independent nation.”

The SNP conference celebrates ten years in power this month, but the focus on Labour follows an eve of conference Scottish Labour report which revealed “an unacceptable divide between the richest and the
poorest Scots,” “spending cuts hurting the poorest,” “an attainment gap in our classrooms”, and a “health service at ‘breaking point.’”

The report pointed out that “the SNP has voted against introducing a 50p top rate of income tax on the highest earners eight times in the Scottish Parliament since 2015”, while under their reign “the number of households in poverty despite at least one adult being employed has increased by 150,000.” It also revealed deteriorating inequality when it comes to Scotland’s health and education outcomes.

Interim Scottish Labour leader Alex Rowley insisted: “As of October 2017, the SNP government has been in power for a decade. The legacy of that decade is one of division.

“Not just on the question of independence but an unacceptable divide between the richest and the poorest Scots.

“The SNP has made decisions in government which have divided Scotland between the rich and the poor in key areas such as tax, health and education.”