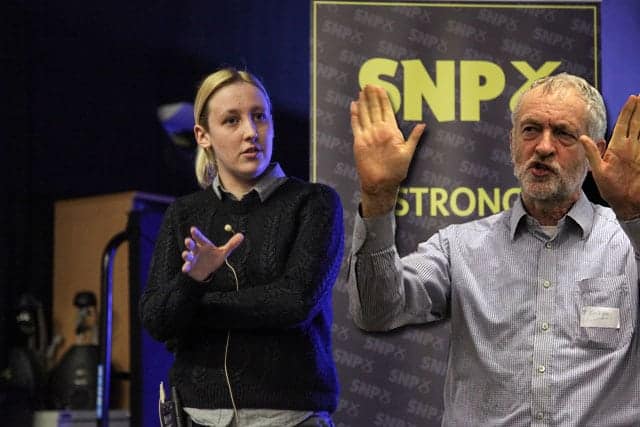 Scottish Labour reacted to Mhairi Black’s attacks on Jeremy Corbyn at the SNP Conference with a scathing attack on her record in office and that of her party.

“I am so disappointed with Jeremy Corbyn, so disappointed,” the SNP MP for Paisley and Renfrewshire had told the SNP Conference, warning the Labour Leader: “don’t dare spread fear and utter drivel about an independent Scotland meaning we would suffer turbo austerity.”

“I’m sick to the back teeth of British nationalists perpetuating the myth that Scotland could not afford to thrive in the world as an independent nation,” added the UK’s youngest MP, accusing Labour of not planning to cut austerity as fast as the SNP would and criticising them for wasting money on renewing Britain’s Trident nuclear deterrent.

Reacting on Mhairi Black’s speech to SNP conference, Scottish Labour MP Danielle Rowley MP said: “Mhairi Black’s anti-austerity posturing would be a bit more credible if she once had spoken out about the £1.5 billion the SNP government had cut from local services across Scotland, or effectively stood up to to plans to downgrade the Children’s Ward at the Royal Alexandra Hospital in her own constituency.”

The MP for Midlothian was referring to Scotland’s flagship children’s hospital forced to close a ward due to a staffing crisis just two years after opening due to staffing shortages.

A damning report released by Scottish Labour to coincide with the SNP’s ten years in power this October revealed a catalogue of NHS failings under the Scottish nationalists. –

Last year’s annual State of the NHS report was the worst since devolution – showing only one out eight key performance indicators was being met. The chair of BMA Scotland has warned that the Scottish NHS workforce is “stretched pretty much to breaking point”. And the NHS was suffering from staff shortages and poor wages, Nicola Sturgeon confronted this year by a nurse who had to turn to a food
bank because of the NHS pay cap.

WATCH: Nurse rips in to Nicola Sturgeon on her record of running the NHS. #LeadersDebate pic.twitter.com/5U3YKpmC8T

The Scottish Labour report also revealed “an unacceptable divide between the richest and the poorest Scots,” “spending cuts hurting the poorest,” “an attainment gap in our classrooms”, and a “health service at ‘breaking point.’”

The report pointed out that “the SNP has voted against introducing a 50p top rate of income tax on the highest earners eight times in the Scottish Parliament since 2015”, while under their reign “the number of households in poverty despite at least one adult being employed has increased by 150,000.” It also revealed deteriorating inequality when it comes to Scotland’s health and education outcomes.

Interim Scottish Labour leader Alex Rowley said: “As of October 2017, the SNP government has been in power for a decade. The legacy of that decade is one of division.

“Not just on the question of independence but an unacceptable divide between the richest and the poorest Scots.

“The SNP has made decisions in government which have divided Scotland between the rich and the poor in key areas such as tax, health and education.”

Mhairi Blacks’s vitriolic Glasgow SNP conference attack on Jeremy Corbyn may be a response to a post-conference opinion poll surge putting Labour five points ahead around the UK, as well as growing criticisms of the SNP’s record after ten years in power.

Mhairi Black had also attacked the Labour Leader for questioning the economic consequences of Scottish Independence.

“Why would Westminster genuinely want to keep us if we were a financial burden?” asked the 23 year old MP for Paisley and Renfrewshire, “I’m sick to the back teeth of British nationalists perpetuating the myth that Scotland could not afford to thrive in the world as an independent nation.”

“What this embarrassing rant reveals is that the SNP has no response to the growing number of people who see that radical change is possible within the UK with a Labour government led by Jeremy Corbyn,” insisted Scottish Labour MP Danielle Rowley MP this afternoon.

Police Federation accuse Theresa May of lying about police pay