Even before the pandemic, Boris Johnson said he didn’t want to hear “that word” again. So, what are they saying instead? 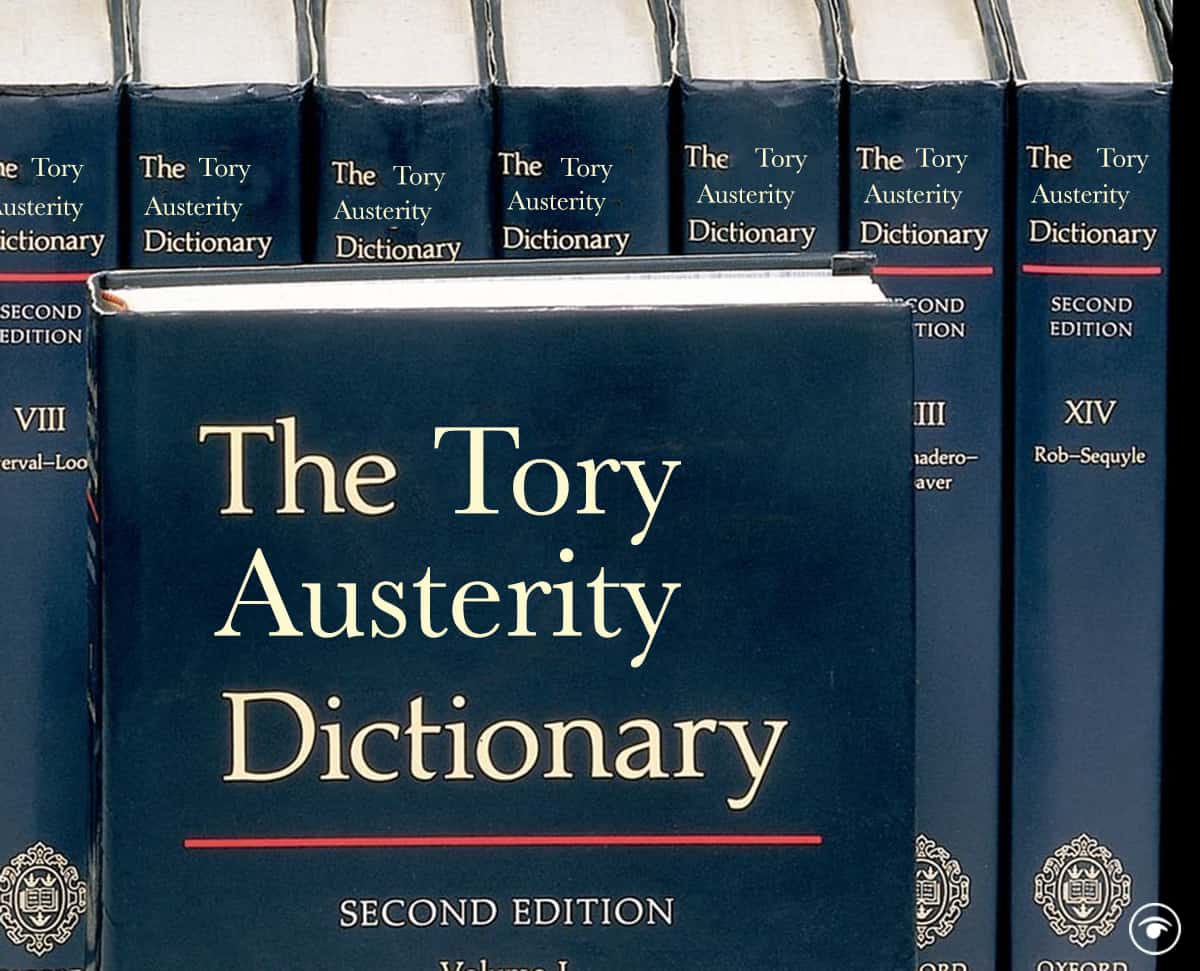 In August last year, The London Economic predicted that the government’s disastrous response to the pandemic would be used as a pretext to impose austerity on the public for another generation. But this time the Tories are not calling it “austerity” because austerity is a politically unpopular term that just got them over the electoral line in 2015 and cost them in 2017.

So, let’s look at the dictionary of some new terms—and their real meanings.

Example: “I think it is now fair to say we have a … clear economic road map to balance the books”—Caroline Ansell, MP for Eastbourne.

Real meaning: Balance the books on the backs of the poor. Cut public spending unequally in relation to tax rises after giving tens of billions of pounds to cronies.

Case-studies: In November, the Office for Budget Responsibility projected that the government will need to slash £27 billion from the public purse or raises taxes. Recently, we’ve learned that although some taxes are set to rise, public service cuts will amount to £30 billion, according to the Institute for Fiscal Studies (IFS). But in July, Sunak spent £30 billion on a stimulus, some of which went to fast food giants under Eat Out to Help Out (and proved to be a COVID spreader event) and a third of which turned out to be old money, according to the IFS.

To date over 1,640 South Koreans have died of/with COVID compared to the UK’s 124,000: one of the very worst overall and per capita figures in the world. By July 2020, South Korea had spent the equivalent of £220 million (with an m) tackling COVID: or 0.5 percent of its health budget compared the UK’s £116 billion  (with a b) COVID measures which amounts to over 80 per cent of the health and social care budget. By the end of the year, the Johnson administration had taken £37 billion from the taxpayer to hand contracts to friends in a failed track-and-trace scheme.

Example: Financial Crisis-era “courageous decisions” are relevant again to save the economy from collapse—Andrew Mitchell, MP for Sutton Coldfield.

Tory parlance: To reduce one’s standard of living for the greater good.

Real meaning: Maintain the living standards of the few while drastically reducing standards for many, while risking electoral decline or defeat.

Case-studies: The Economic and Social Research Council notes that “particular people and places are being disproportionately affected by the socioeconomic fall-out from COVID-19.” So, the “courageous decisions” are already hurting poorer people.

Two months into the pandemic, the Resolution Foundation wrote that claiming Universal Credit for the first time is “a shock to families’ living standards” as new claimants tend to have higher savings and earnings than existing ones. More than a third of new claimants had trouble paying bills, 42 per cent reduced personal spending, and more than half took from savings.

By August 2020, social security claims had risen from 1.2 million to 2.7 million. Nearly half of the people in the new cohort are under 39 and nearly four in ten have no prior health conditions, unlike nearly seven in ten existing claimants. By September, 300,000 people who had lost their jobs due to the government’s handling of the pandemic had been denied Universal Credit due to their partner’s earnings or personal saving. Claimants reported surprise at the low levels of personal benefits relative to their insurance contributions.

Example: “[It is] time to rediscover and reassert some basic truths of fiscal conservatism and cast illusions aside … [K]eeping the country creditworthy has stood [Tory Prime Ministers] in very good stead”—Lord William Hague, former Tory leader and Foreign Secretary.

Tory parlance: To raise taxes or not raise taxes (depending on which Tory is advocating the approach) and limit public spending.

Real meaning: Give public money to big companies to inflate their credit ratings and stock valuations.

Case-studies: “Fiscal conservatism” means that SMEs pay a big price. There are nearly 6 million small businesses in the UK employing 16.8 million people. Prior to the pandemic, around 330,000 UK businesses failed each year. In addition to the expected 300k closures, the

Federation of Small businesses reckons that by early next year, 250,000 firms will be forced to shut their doors. FSB Chairman, Mike Cherry, said: “The support mechanisms put in place weren’t perfect, but they were an exceptionally good starting point. That’s why it’s so disappointing that [the government] met this second lockdown with a whimper.”

“Fiscal conservatism” was abandoned for big business, however. By June 2020, the government had given over £16 billion to 53 mainly large companies under the COVID reliefpackage. Brewers and pub operators claimed hundredsof millions, as did hotel firms and giantretailers including Marks & Spencer. British Airways, EasyJet, Ryanair, and Wizz Airclaimed £1.8 billion from the government, as did Honda, Nissan, Rolls-Royce, andToyota, which enjoyed over £1bn.

Example: “Pausing headline pay awards next year for some workforces will allow the government to protect public sector jobs and investment in public services”—Treasury, Spending Review.

Case-studies: In November, Sunak confirmed that many public sector workers will face salary reductions. The Financial Times argued that this is what was meant by “headline pay” pause. Unison General Secretary, Dave Prentis, said: “This is austerity plain and simple.” Sunak’s claim that public sector staff are, on average, better paid than private sector workers is disputed by the IFS Director Paul Johnson, who said that this mainly applied to lower-paid workers. This implies that middle-income public sector workers were already being hollowed out.

Live within our means

Example: “We have to balance the books and live within our means as a country again”—Anthony Browne, MP for South Cambridgeshire.

Tory parlance: Reduce our living standards to save money.

Real meaning: Forcibly reduce the life qualities of millions so that the privileged few can continue their high standards.

Case-studies: The poorest quintile (around 14 million people) saw an average drop in their incomes/increase in their debts of £170 a month. Typically, the poorest have negative savings, from -11 to -24 percent measured by income to consumption. In October, the IFS reported that middle- and high-income earners saw their savings increase. For the three million malnourished adults in England, “living within their means” means continuing to starve. For the parents of Britain’s 3.7 million children in households earning under £15,800 a year, it means continuing to struggle to find money for food.

For the likes of Jacob Rees-Mogg who backs these policies, “living within his means” means having to take some of he and his wife’s anticipated £100 million net worth to repair damage done to her Rover by vandals who apparently meant to target one Mr Rees-Mogg’s two Bentleys.

Example: “I’ve had to make some tough choices and what I couldn’t do is justify [a] … rise in public sector pay”—Chancellor Rishi Sunak.

Tory parlance: Decisions that cause ministers emotional pain, but are necessary to repair the economy.

Real meaning: Taking from the poor to give to the rich (see “Courageous decisions” and “Living within our means,” above).

Case-study: It must be a tough choice for Sunak, the UK’s richest MP, sitting in one of his four properties worth £10 million, to decide whether or not to answer if he will profit personally from the Moderna vaccine, in which his former hedge fund Theleme Partners is invested. It must also be tough to choose to watch the money from he and wife’s various investments rolling in: the $1.7 billion shareholding in Infosystems, which won government contracts; the £900m per annum joint venture in Amazon India via an investment firm owned by his wife’s father; her holdings in restaurant chains; and the five companies in which she is directly invested—none of which have been declared on his register of interests.

It must also be a tough choice for Sunak to take no action knowing that the restaurant chain investor, International Market Management, has legally avoided paying certain taxes by funnelling cash through a Mauritius-based haven.

It is time for the British public to regain their sense of outrage over inequality, injustice, and institutionalised corruption, and vote out this party for good. Although we have concerns about the rightward drift of Labour under Keir Starmer, we can start the process of getting the Tories out by backing Labour at the upcoming council elections.