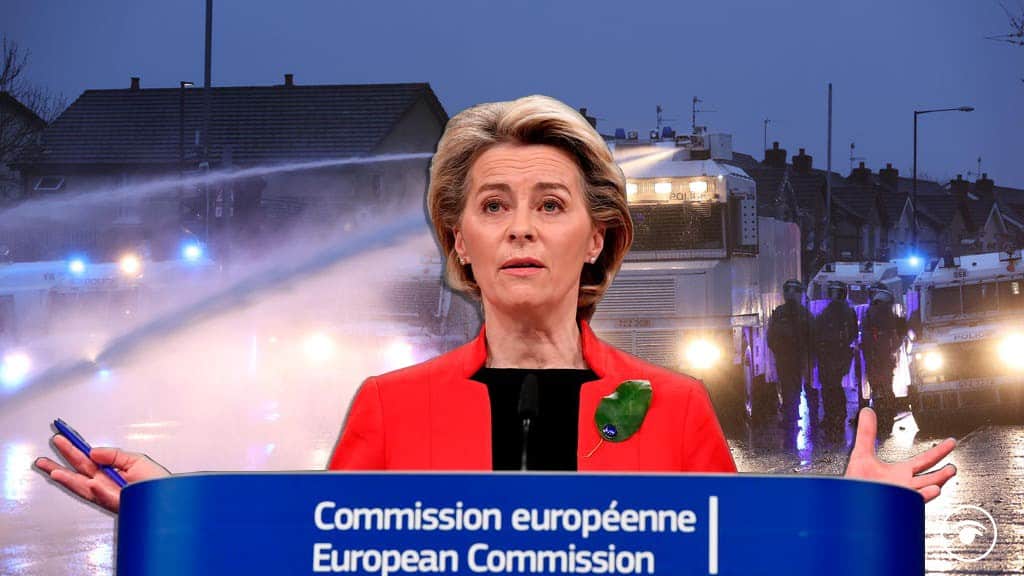 A historian has pointed the finger at the European Union for this week’s disturbances in Northern Ireland.

Ruth Dudley Edwards claimed the EU had used the state to put maximum pressure on the UK to agree a Brexit deal.

Although there were alternatives to the protocol, she insisted Boris Johnson had been forced to accept a deal that impedes trade between Great Britain and Northern Ireland due to his predecessor.

Despite agreeing to the deal, the commentator also warned Brussels had chosen to interpret the customs rules as strictly as possible to inflict “maximum damage” to the UK.

Writing for the MailOnline, Ms Dudley Edwards said: “During Brexit negotiations, the EU, encouraged by the Irish government, cynically set out to weaponise Northern Ireland to scupper a deal or at the very least heavily punish the British.

“There was a perfectly feasible way through smart technology and a Trusted Trader scheme to have a virtually invisible border on the Irish/EU side.

“But Theresa May and her negotiating team caved into the ludicrously exaggerated warnings about how a land border would lead to a resumption of violence and the death of the 1998 Good Friday Agreement.

“By the time Boris Johnson took over in December 2019, the pass had been sold.

“Out of sheer spite, the EU has chosen to interpret the rules as inflexibly as possible and cause maximum disruption.”

Leaders in Northern Ireland are fearful the chaos that has plagued the region in recent days will continue into the weekend.

Loyalists have urged their communities to desist from protest activity as a mark of respect for the Duke of Edinburgh, who passed away on Friday.

Despite this, there were small pockets of unrest continued in parts of the province last night.

There was a heavy police presence in the area overnight, with reports that stones were also thrown at officers in the nearby, nationalist area New Lodge.